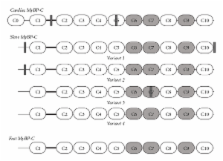 Myosin-Binding protein-C (MyBP-C) is a family of accessory proteins of striated muscles that contributes to the assembly and stabilization of thick filaments, and regulates the formation of actomyosin cross-bridges, via direct interactions with both thick myosin and thin actin filaments. Three distinct MyBP-C isoforms have been characterized; cardiac, slow skeletal, and fast skeletal. Numerous mutations in the gene for cardiac MyBP-C (cMyBP-C) have been associated with familial hypertrophic cardiomyopathy (FHC) and have led to increased interest in the regulation and roles of the cardiac isoform. This review will summarize our current knowledge on MyBP-C and its role in modulating contractility, focusing on its interactions with both myosin and actin filaments in cardiac and skeletal muscles.

Rachel M Holden, I Rayment, Wojciech R Rypniewski … (1993)
Directed movement is a characteristic of many living organisms and occurs as a result of the transformation of chemical energy into mechanical energy. Myosin is one of three families of molecular motors that are responsible for cellular motility. The three-dimensional structure of the head portion of myosin, or subfragment-1, which contains both the actin and nucleotide binding sites, is described. This structure of a molecular motor was determined by single crystal x-ray diffraction. The data provide a structural framework for understanding the molecular basis of motility.

Atomic model of a myosin filament in the relaxed state.

John Woodhead, Fa-Qing Zhao, Roger Craig … (2005)
Contraction of muscle involves the cyclic interaction of myosin heads on the thick filaments with actin subunits in the thin filaments. Muscles relax when this interaction is blocked by molecular switches on either or both filaments. Insight into the relaxed (switched OFF) structure of myosin has come from electron microscopic studies of smooth muscle myosin molecules, which are regulated by phosphorylation. These studies suggest that the OFF state is achieved by an asymmetric, intramolecular interaction between the actin-binding region of one head and the converter region of the other, switching both heads off. Although this is a plausible model for relaxation based on isolated myosin molecules, it does not reveal whether this structure is present in native myosin filaments. Here we analyse the structure of a phosphorylation-regulated striated muscle thick filament using cryo-electron microscopy. Three-dimensional reconstruction and atomic fitting studies suggest that the 'interacting-head' structure is also present in the filament, and that it may underlie the relaxed state of thick filaments in both smooth and myosin-regulated striated muscles over a wide range of species.