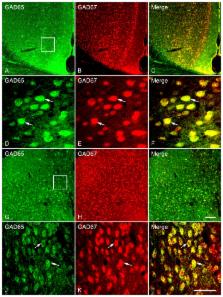 Gamma-aminobutyric acid (GABA) neurotransmission in the lateral septum (LS) is implicated in modulating various behavioral processes, including emotional reactivity and maternal behavior. However, identifying the phenotype of GABAergic neurons in the CNS has been hampered by the longstanding inability to reliably detect somal immunoreactivity for GABA or glutamic acid decarboxylase (GAD), the enzyme that produces GABA. In this study, we designed unique probes for both GAD65 (GAD2) and GAD67 (GAD1), and used fluorescence in Situ hybridization (FISH) with tyramide signal amplification (TSA) to achieve unequivocal detection of cell bodies of GABAergic neurons by GAD mRNAs. We quantitatively characterized the expression and chemical phenotype of GABAergic neurons across each subdivision of LS and in cingulate cortex (Cg) and medial preoptic area (MPOA) in female mice. Across LS, almost all GAD65 mRNA-expressing neurons were found to contain GAD67 mRNA (approximately 95-98%), while a small proportion of GAD67 mRNA-containing neurons did not express GAD65 mRNA (5-14%). Using the neuronal marker NeuN, almost every neuron in LS (> 90%) was also found to be GABA-positive. Interneuron markers using calcium-binding proteins showed that LS GABAergic neurons displayed immunoreactivity for calbindin (CB) or calretinin (CR), but not parvalbumin (PV); almost all CB- or CR-immunoreactive neurons (98-100%) were GABAergic. The proportion of GABAergic neurons immunoreactive for CB or CR varied depending on the subdivisions examined, with the highest percentage of colocalization in the caudal intermediate LS (LSI) (approximately 58% for CB and 35% for CR). These findings suggest that the vast majority of GABAergic neurons within the LS have the potential for synthesizing GABA via the dual enzyme systems GAD65 and GAD67, and each subtype of GABAergic neurons identified by distinct calcium-binding proteins may exert unique roles in the physiological function and neuronal circuitry of the LS.

Julia C. Buck,  Thomas A Smith,  Andrew R Mullen … (1992)
A battery of monoclonal antibodies (mAbs) against brain cell nuclei has been generated by repeated immunizations. One of these, mAb A60, recognizes a vertebrate nervous system- and neuron-specific nuclear protein that we have named NeuN (Neuronal Nuclei). The expression of NeuN is observed in most neuronal cell types throughout the nervous system of adult mice. However, some major cell types appear devoid of immunoreactivity including cerebellar Purkinje cells, olfactory bulb mitral cells, and retinal photoreceptor cells. NeuN can also be detected in neurons in primary cerebellar cultures and in retinoic acid-stimulated P19 embryonal carcinoma cells. Immunohistochemically detectable NeuN protein first appears at developmental timepoints which correspond with the withdrawal of the neuron from the cell cycle and/or with the initiation of terminal differentiation of the neuron. NeuN is a soluble nuclear protein, appears as 3 bands (46-48 x 10(3) M(r)) on immunoblots, and binds to DNA in vitro. The mAb crossreacts immunohistochemically with nervous tissue from rats, chicks, humans, and salamanders. This mAb and the protein recognized by it serve as an excellent marker for neurons in the central and peripheral nervous systems in both the embryo and adult, and the protein may be important in the determination of neuronal phenotype.

Green fluorescent protein expression and colocalization with calretinin, parvalbumin, and somatostatin in the GAD67-GFP knock-in mouse.

Takeshi Kaneko,  Kunihiko Obata,  Jun-Ichi Miyazaki … (2003)
Gamma-aminobutyric acid (GABA)ergic neurons in the central nervous system regulate the activity of other neurons and play a crucial role in information processing. To assist an advance in the research of GABAergic neurons, here we produced two lines of glutamic acid decarboxylase-green fluorescence protein (GAD67-GFP) knock-in mouse. The distribution pattern of GFP-positive somata was the same as that of the GAD67 in situ hybridization signal in the central nervous system. We encountered neither any apparent ectopic GFP expression in GAD67-negative cells nor any apparent lack of GFP expression in GAD67-positive neurons in the two GAD67-GFP knock-in mouse lines. The timing of GFP expression also paralleled that of GAD67 expression. Hence, we constructed a map of GFP distribution in the knock-in mouse brain. Moreover, we used the knock-in mice to investigate the colocalization of GFP with NeuN, calretinin (CR), parvalbumin (PV), and somatostatin (SS) in the frontal motor cortex. The proportion of GFP-positive cells among NeuN-positive cells (neocortical neurons) was approximately 19.5%. All the CR-, PV-, and SS-positive cells appeared positive for GFP. The CR-, PV, and SS-positive cells emitted GFP fluorescence at various intensities characteristics to them. The proportions of CR-, PV-, and SS-positive cells among GFP-positive cells were 13.9%, 40.1%, and 23.4%, respectively. Thus, the three subtypes of GABAergic neurons accounted for 77.4% of the GFP-positive cells. They accounted for 6.5% in layer I. In accord with unidentified GFP-positive cells, many medium-sized spherical somata emitting intense GFP fluorescence were observed in layer I. Copyright 2003 Wiley-Liss, Inc.

This work was supported by National Institutes of Health Grant R01 MH 085642 to Stephen Gammie. The funders had no role in study design, data collection and analysis, decision to publish, or preparation of the manuscript.