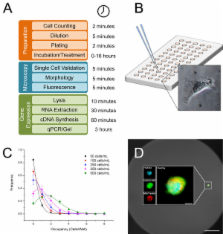 Heterogeneity within cell populations is relevant to the onset and progression of disease, as well as development and maintenance of homeostasis. Analysis and understanding of the roles of heterogeneity in biological systems require methods and technologies that are capable of single cell resolution. Single cell gene expression analysis by RT-qPCR is an established technique for identifying transcriptomic heterogeneity in cellular populations, but it generally requires specialized equipment or tedious manipulations for cell isolation.

We describe the optimization of a simple, inexpensive and rapid pipeline which includes isolation and culture of live single cells as well as fluorescence microscopy and gene expression analysis of the same single cells by RT-qPCR. We characterize the efficiency of single cell isolation and demonstrate our method by identifying single GFP-expressing cells from a mixed population of GFP-positive and negative cells by correlating fluorescence microscopy and RT-qPCR.

Single cell gene expression analysis by RT-qPCR is a convenient means for investigating cellular heterogeneity, but is most useful when correlating observations with additional measurements. We demonstrate a convenient and simple pipeline for multiplexing single cell RT-qPCR with fluorescence microscopy which is adaptable to other molecular analyses.

Applying the principles of stem-cell biology to cancer.

Jerrah Robbins,  Ning Sun,  T. Jan … (2011)
Human induced pluripotent stem cells (hiPSCs) and human embryonic stem cells (hESCs) are promising candidate cell sources for regenerative medicine. However, despite the common ability of hiPSCs and hESCs to differentiate into all 3 germ layers, their functional equivalence at the single cell level remains to be demonstrated. Moreover, single cell heterogeneity amongst stem cell populations may underlie important cell fate decisions. Here, we used single cell analysis to resolve the gene expression profiles of 362 hiPSCs and hESCs for an array of 42 genes that characterize the pluripotent and differentiated states. Comparison between single hESCs and single hiPSCs revealed markedly more heterogeneity in gene expression levels in the hiPSCs, suggesting that hiPSCs occupy an alternate, less stable pluripotent state. hiPSCs also displayed slower growth kinetics and impaired directed differentiation as compared with hESCs. Our results suggest that caution should be exercised before assuming that hiPSCs occupy a pluripotent state equivalent to that of hESCs, particularly when producing differentiated cells for regenerative medicine aims.