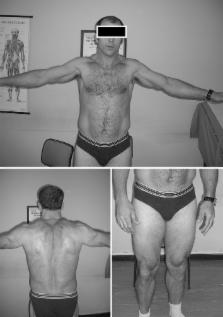 Myotonia congenita (MC) is an inherited muscle disease characterized by impaired muscle relaxation after contraction, resulting in muscle stiffness. Both recessive (Becker’s disease) or dominant (Thomsen’s disease) MC are caused by mutations in the CLCN1 gene encoding the voltage-dependent chloride ClC-1 channel, which is quite exclusively expressed in skeletal muscle. More than 200 CLCN1 mutations have been associated with MC. We provide herein a detailed clinical, molecular, and functional evaluation of four patients with recessive MC belonging to three different families. Four CLCN1 variants were identified, three of which have never been characterized. The c.244A>G (p.T82A) and c.1357C>T (p.R453W) variants were each associated in compound heterozygosity with c.568GG>TC (p.G190S), for which pathogenicity is already known. The new c.809G>T (p.G270V) variant was found in the homozygous state. Patch-clamp studies of ClC-1 mutants expressed in tsA201 cells confirmed the pathogenicity of p.G270V, which greatly shifts the voltage dependence of channel activation toward positive potentials. Conversely, the mechanisms by which p.T82A and p.R453W cause the disease remained elusive, as the mutated channels behave similarly to WT. The results also suggest that p.G190S does not exert dominant-negative effects on other mutated ClC-1 subunits. Moreover, we performed a RT-PCR quantification of selected ion channels transcripts in muscle biopsies of two patients. The results suggest gene expression alteration of sodium and potassium channel subunits in myotonic muscles; if confirmed, such analysis may pave the way toward a better understanding of disease phenotype and a possible identification of new therapeutic options.

Thomas Jentsch,  F Horn,  K Steinmeyer … (1992)
Autosomal recessive generalized myotonia (Becker's disease) (GM) and autosomal dominant myotonia congenita (Thomsen's disease) (MC) are characterized by skeletal muscle stiffness that is a result of muscle membrane hyperexcitability. For both diseases, alterations in muscle chloride or sodium currents or both have been observed. A complementary DNA for a human skeletal muscle chloride channel (CLC-1) was cloned, physically localized on chromosome 7, and linked to the T cell receptor beta (TCRB) locus. Tight linkage of these two loci to GM and MC was found in German families. An unusual restriction site in the CLC-1 locus in two GM families identified a mutation associated with that disease, a phenylalanine-to-cysteine substitution in putative transmembrane domain D8. This suggests that different mutations in CLC-1 may cause dominant or recessive myotonia.

William J Brackenbury,  Lori L. Isom (2011)
Voltage-gated Na+ channels (VGSCs) in mammals contain a pore-forming α subunit and one or more β subunits. There are five mammalian β subunits in total: β1, β1B, β2, β3, and β4, encoded by four genes: SCN1B–SCN4B. With the exception of the SCN1B splice variant, β1B, the β subunits are type I topology transmembrane proteins. In contrast, β1B lacks a transmembrane domain and is a secreted protein. A growing body of work shows that VGSC β subunits are multifunctional. While they do not form the ion channel pore, β subunits alter gating, voltage-dependence, and kinetics of VGSCα subunits and thus regulate cellular excitability in vivo. In addition to their roles in channel modulation, β subunits are members of the immunoglobulin superfamily of cell adhesion molecules and regulate cell adhesion and migration. β subunits are also substrates for sequential proteolytic cleavage by secretases. An example of the multifunctional nature of β subunits is β1, encoded by SCN1B, that plays a critical role in neuronal migration and pathfinding during brain development, and whose function is dependent on Na+ current and γ-secretase activity. Functional deletion of SCN1B results in Dravet Syndrome, a severe and intractable pediatric epileptic encephalopathy. β subunits are emerging as key players in a wide variety of physiopathologies, including epilepsy, cardiac arrhythmia, multiple sclerosis, Huntington’s disease, neuropsychiatric disorders, neuropathic and inflammatory pain, and cancer. β subunits mediate multiple signaling pathways on different timescales, regulating electrical excitability, adhesion, migration, pathfinding, and transcription. Importantly, some β subunit functions may operate independently of α subunits. Thus, β subunits perform critical roles during development and disease. As such, they may prove useful in disease diagnosis and therapy.

Open AccessThis article is distributed under the terms of the Creative Commons Attribution 4.0 International License (http://creativecommons.org/licenses/by/4.0/), which permits unrestricted use, distribution, and reproduction in any medium, provided you give appropriate credit to the original author(s) and the source, provide a link to the Creative Commons license, and indicate if changes were made.