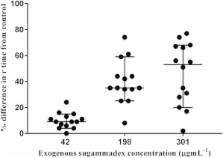 Previous studies have shown that sugammadex resulted in the prolongation of prothrombin time and activated partial thromboplastin time. In this study, we aimed to investigate the in vitro effects of exogenous sugammadex on the coagulation variables of whole blood in healthy patients who underwent orthopedic surgery.

The effects of sugammadex on coagulations were assessed using thromboelastography (TEG) in kaolin-activated citrated blood samples taken from 14 healthy patients who underwent orthopedic surgery. The in vitro effects of three different concentrations of sugammadex (42, 193, and 301 μg mL − 1) on the TEG profiles were compared with those of the control (0 μg mL − 1). Previous studies indicated that these exogenous concentrations correspond to the approximate maximum plasma concentrations achieved after the administration of 4, 16, and 32 mg kg − 1 sugammadex to healthy subjects.

Increased sugammadex concentrations were significantly associated with reduced coagulation, as evidenced by increases in reaction time (r), coagulation time, and time to maximum rate of thrombus generation (TMRTG), and decreases in the angle, maximum amplitude, and maximum rate of thrombus generation. Compared with the control, the median percentage change (interquartile range) in the TEG values of the samples treated with the highest exogenous sugammadex concentration was the greatest for r, 53% (26, 67.3%), and TMRTG, 48% (26, 59%).

This in vitro study suggests that supratherapeutic doses of exogenous sugammadex might be associated with moderate hypocoagulation in the whole blood of healthy subjects.

Use of Thromboelastography (TEG) for Detection of New Oral Anticoagulants.

João Dias,  Katherine Norem,  Derek Doorneweerd … (2015)
The clinical introduction of new oral anticoagulants (NOACs) has stimulated the development of tests to quantify the effects of these drugs and manage complications associated with their use. Until recently, the only treatment choices for the prevention of venous thromboembolism in orthopedic surgical patients, as well as for stroke and systemic embolism in patients with atrial fibrillation, were vitamin K antagonists, antiplatelet drugs, and unfractionated and low-molecular-weight heparins. With the approval of NOACs, treatment options and consequent diagnostic challenges have expanded.

Effect of reversal of neuromuscular blockade with sugammadex versus usual care on bleeding risk in a randomized study of surgical patients.

In normal controls, both age and gender affect coagulability as measured by thrombelastography.

Wilfried Roeloffzen,  André B. Mulder,  Marc Van De Velde … (2010)
Our objective was to analyze the effects of age, gender, and the use of oral contraceptives (OCs) on coagulation using thrombelastography (TEG), a single test to analyze both plasma coagulation factors and cellular elements in whole blood. TEG variables were measured in native whole blood and in recalcified citrated blood from 120 healthy adults (60 men and 60 women) with various ages and in an additional 29 healthy women using OCs. We observed hypercoagulability in women compared with men and in women using OCs compared with age-matched nonusers. Moreover, we found hypercoagulability with aging. Using the method of Bland and Altman (Lancet 1986;1:307-10), we demonstrated no correlation between TEG measurements in native and recalcified citrated blood. Aging, female gender, use of OCs, and low-normal hematocrit levels have significant procoagulant effects. TEG measurements in native and recalcified citrated blood are not interchangeable, as indicated by differences between the 2 measurements ranging from 20% in maximal amplitude to 246% in clotting time. Furthermore, the limits of agreement strongly exceeded clinical acceptability to conclude interchangeability.