Norovirus-specific immunoglobulin A in breast milk for protection against norovirus-associated diarrhea among infants. 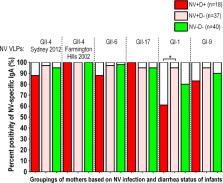 Norovirus (NV) causes acute gastroenteritis in infants. Humoral and fecal immunoglobulin A (IgA) responses have been correlated with protection against NV; however, the role of breast milk IgA against NV infection and associated diarrhea is still unknown. This study aimed to evaluate the protective role of NV-specific IgA (NV-IgA) in breast milk.

Ninety-five breast milk samples collected from mothers enrolled in a 2016–2017 Peruvian birth cohort study were tested for total IgA and NV-IgA by ELISA using GII·4 variants and non-GII·4 genotype virus-like particles (VLPs). Breast milk samples were grouped according to the NV infection and diarrheal status of infants: NV positive with diarrhea (NV+D+, n=18); NV positive without diarrhea (NV+D-, n=37); and NV negative without diarrhea (NV-D-, n=40). The percent positivity and titer of NV-IgA were compared among groups. The cross-reactivity was estimated based on the correlation of ratio between NV-IgA against GII·4 variants and non-GII·4 genotype VLPs.

Mothers with high positivity rates and titers of NV-IgA in breast milk had NV infected infants with reduced diarrheal symptoms. Antigenic relatedness to the genetic diversity of human norovirus was suggested.

Emerald: Quality Education for All

Antone Opekun,  David Graham,  Mark Gilger … (2010)
Norovirus infection is the leading cause of acute nonbacterial gastroenteritis. Histoblood group antigens (HBGAs) are host susceptibility determinants for Norwalk virus (NV) infection. We hypothesized that antibodies that block NV-HBGA binding are associated with protection from clinical illness following NV exposure. We developed an HBGA blocking assay to examine the ability of human serum to block the interaction of NV viruslike particles with H type 1 and H type 3 glycans. Serum samples from persons who were experimentally challenged with NV were evaluated. There was a high correlation between the H type 1 and H type 3 synthetic glycan assays (r = 0.977; P 25), compared with 2 of 12 subjects with gastroenteritis (P = .002). Blocking antibodies correlate with protection against clinical NV gastroenteritis. This knowledge will help guide the evaluation of new vaccine strategies and the elucidation of the nature of immunity to the virus. Trial registration. ClinicalTrials.gov identifier: NCT00138476.

Ben A Lopman,  Tarak Trivedi,  Yosselin Vicuña … (2014)
Background.  Although norovirus is the most common cause of gastroenteritis, there are few data on the community incidence of infection/disease or the patterns of acquired immunity or innate resistance to norovirus. Methods.  We followed a community-based birth cohort of 194 children in Ecuador with the aim to estimate (1) the incidence of norovirus gastroenteritis from birth to age 3 years, (2) the protective effect of norovirus infection against subsequent infection/disease, and (3) the association of infection and disease with FUT2 secretor status. Results.  Over the 3-year period, we detected a mean of 2.26 diarrheal episodes per child (range, 0–12 episodes). Norovirus was detected in 260 samples (18%) but was not found more frequently in diarrheal samples (79 of 438 [18%]), compared with diarrhea-free samples (181 of 1016 [18%]; P = .919). A total of 66% of children had at least 1 norovirus infection during the first 3 years of life, and 40% of children had 2 infections. Previous norovirus infections were not associated with the risk of subsequent infection. All genogroup II, genotype 4 (GII.4) infections were among secretor-positive children (P < .001), but higher rates of non-GII.4 infections were found in secretor-negative children (relative risk, 0.56; P = .029). Conclusions.  GII.4 infections were uniquely detected in secretor-positive children, while non-GII.4 infections were more often found in secretor-negative children.

Johan Nordgren,  Leon Nitiema,  Djeneba Ouermi … (2013)
Norovirus (NoV) constitutes the second most common viral pathogen causing pediatric diarrhea after rotavirus. In Africa, diarrhea is a major health problem in children, and yet few studies have been performed regarding NoV. The association of histo-blood group antigens (HBGA) and susceptibility to NoV infection is well established in Caucasian populations with non-secretors being resistant to many common NoV strains. No study regarding HBGA and NoV susceptibility has yet been performed in Africa. We collected 309 stool and 208 saliva samples from diarrheal children in Ouagadougou, Burkina Faso; May 2009 to March 2010. NoV was detected using real-time PCR, and genotyped by sequencing. Saliva samples were ABO, Lewis and secretor phenotyped using in house ELISA assays. NoV was detected in 12% (n = 37) of the samples. The genotype diversity was unusually large; overall the 37 positive samples belonged to 14 genotypes. Only children <2 years of age were NoV positive and the GII.4 NoVs were more frequent in the late dry season (Jan-May). NoV infections were observed less in children with the secretor-negative phenotype or blood group A (OR 0.18; p = 0.012 and OR 0.31; p = 0.054; respectively), with two non-secretors infected with genotypes GII.7 and GII.4 respectively. Lewis-negative (Lea−b−) children, representing 32% of the study population, were susceptible to GII, but were not infected with any NoV GI. GII.4 strains preferentially infected children with blood group B whereas secretor-positive children with blood group O were infected with the largest variety of genotypes. This is the first study identifying host genetic factors associated with susceptibility to NoV in an African population, and suggests that while the non-secretor phenotype provides protection; the Lewis b antigen is not necessary for GII infection.