Surface-Modified Nanocarriers for Nose-to-Brain Delivery: From Bioadhesion to Targeting 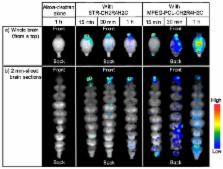 In the field of nasal drug delivery, nose-to-brain delivery is among the most fascinating applications, directly targeting the central nervous system, bypassing the blood brain barrier. Its benefits include dose lowering and direct brain distribution of potent drugs, ultimately reducing systemic side effects. Recently, nasal administration of insulin showed promising results in clinical trials for the treatment of Alzheimer’s disease. Nanomedicines could further contribute to making nose-to-brain delivery a reality. While not disregarding the need for devices enabling a formulation deposition in the nose’s upper part, surface modification of nanomedicines appears the key strategy to optimize drug delivery from the nasal cavity to the brain. In this review, nanomedicine delivery based on particle engineering exploiting surface electrostatic charges, mucoadhesive polymers, or chemical moieties targeting the nasal epithelium will be discussed and critically evaluated in relation to nose-to-brain delivery.

Mucus-penetrating nanoparticles for drug and gene delivery to mucosal tissues.

Samuel Lai,  Ying-Ying Wang,  Justin Hanes (2009)
Mucus is a viscoelastic and adhesive gel that protects the lung airways, gastrointestinal (GI) tract, vagina, eye and other mucosal surfaces. Most foreign particulates, including conventional particle-based drug delivery systems, are efficiently trapped in human mucus layers by steric obstruction and/or adhesion. Trapped particles are typically removed from the mucosal tissue within seconds to a few hours depending on anatomical location, thereby strongly limiting the duration of sustained drug delivery locally. A number of debilitating diseases could be treated more effectively and with fewer side effects if drugs and genes could be more efficiently delivered to the underlying mucosal tissues in a controlled manner. This review first describes the tenacious mucus barrier properties that have precluded the efficient penetration of therapeutic particles. It then reviews the design and development of new mucus-penetrating particles that may avoid rapid mucus clearance mechanisms, and thereby provide targeted or sustained drug delivery for localized therapies in mucosal tissues.

Angad Mehta,  Dennis G. Watson,  Mark P. Green … (2008)
Reduced brain insulin signaling and low CSF-to-plasma insulin ratios have been observed in patients with Alzheimer disease (AD). Furthermore, intracerebroventricular or IV insulin administration improve memory, alter evoked potentials, and modulate neurotransmitters, possibly by augmenting low brain levels. After intranasal administration, insulin-like peptides follow extracellular pathways to the brain within 15 minutes. We tested the hypothesis that daily intranasal insulin treatment would facilitate cognition in patients with early AD or its prodrome, amnestic mild cognitive impairment (MCI). The proportion of verbal information retained after a delay period was the planned primary outcome measure. Secondary outcome measures included attention, caregiver rating of functional status, and plasma levels of insulin, glucose, beta-amyloid, and cortisol. Twenty-five participants were randomly assigned to receive either placebo (n = 12) or 20 IU BID intranasal insulin treatment (n = 13) using an electronic atomizer, and 24 participants completed the study. Participants, caregivers, and all clinical evaluators were blinded to treatment assignment. Cognitive measures and blood were obtained at baseline and after 21 days of treatment. Fasting plasma glucose and insulin were unchanged with treatment. The insulin-treated group retained more verbal information after a delay compared with the placebo-assigned group (p = 0.0374). Insulin-treated subjects also showed improved attention (p = 0.0108) and functional status (p = 0.0410). Insulin treatment raised fasting plasma concentrations of the short form of the beta-amyloid peptide (A beta 40; p = 0.0471) without affecting the longer isoform (A beta 42), resulting in an increased A beta 40/42 ratio (p = 0.0207). The results of this pilot study support further investigation of the benefits of intranasal insulin for patients with Alzheimer disease, and suggest that intranasal peptide administration may be a novel approach to the treatment of neurodegenerative disorders.

Richard Cone (2009)
Mucus is tenacious. It sticks to most particles, preventing their penetration to the epithelial surface. Multiple low-affinity hydrophobic interactions play a major role in these adhesive interactions. Mucus gel is also shear-thinning, making it an excellent lubricant that ensures an unstirred layer of mucus remains adherent to the epithelial surface. Thus nanoparticles (NP) must diffuse readily through the unstirred adherent layer if they are to contact epithelial cells efficiently. This article reviews some of the physiological and biochemical properties that form the mucus barrier. Capsid viruses can diffuse through mucus as rapidly as through water and thereby penetrate to the epithelium even though they have to diffuse 'upstream' through mucus that is being continuously secreted. These viruses are smaller than the mucus mesh spacing, and have surfaces that do not stick to mucus. They form a useful model for developing NP for mucosal drug delivery.