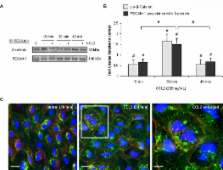 Journal: Laboratory investigation; a journal of technical methods and pathology

Alterations to blood-brain barrier (BBB) adhesion molecules and junctional integrity during neuroinflammation can promote central nervous system (CNS) pathology. The chemokine CCL2 is elevated during CNS inflammation and is associated with endothelial dysfunction. The effects of CCL2 on endothelial adherens junctions (AJ) have not been defined. We demonstrate that CCL2 transiently induces Src-dependent disruption of human brain microvascular endothelial AJ. β-catenin is phosphorylated and traffics from the AJ to PECAM-1, where it is sequestered at the membrane. PECAM-1 is also tyrosine phosphorylated, an event associated with recruitment of the phosphatase SHP-2 to PECAM-1, β-catenin release from PECAM-1, and reassociation of β-catenin with the AJ. Surface localization of PECAM-1 is increased in response to CCL2. This may enable the endothelium to sustain CCL2-induced alterations in AJ and facilitate recruitment of leukocytes into the CNS. Our novel findings provide a mechanism for CCL2-mediated disruption of endothelial junctions that may contribute to BBB dysfunction and increased leukocyte recruitment in neuroinflammatory diseases.

Multiple sclerosis--the plaque and its pathogenesis.

M B Calalb,  Andrew S. Hanks,  T Polte … (1995)
Focal adhesion kinase (FAK) is a widely expressed nonreceptor protein-tyrosine kinase implicated in integrin-mediated signal transduction pathways and in the process of oncogenic transformation by v-Src. Elevation of FAK's phosphotyrosine content, following both cell adhesion to extracellular matrix substrata and cell transformation by Rous sarcoma virus, correlates directly with an increased kinase activity. To help elucidate the role of FAK phosphorylation in signal transduction events, we used a tryptic phosphopeptide mapping approach to identify tyrosine sites of phosphorylation responsive to both cell adhesion and Src transformation. We have identified four tyrosines, 397, 407, 576, and 577, which are phosphorylated in mouse BALB/3T3 fibroblasts in an adhesion-dependent manner. Tyrosine 397 has been previously recognized as the major site of FAK autophosphorylation. Phosphorylation of tyrosines 407, 576, and 577, which are previously unrecognized sites, is significantly elevated in the presence of c-Src in vitro and v-Src in vivo. Tyrosines 576 and 577 lie within catalytic subdomain VIII--a region recognized as a target for phosphorylation-mediated regulation of protein kinase activity. We found that maximal kinase activity of FAK immune complexes requires phosphorylation of both tyrosines 576 and 577. Our results indicate that phosphorylation of FAK by Src (or other Src family kinases) is an important step in the formation of an active signaling complex.