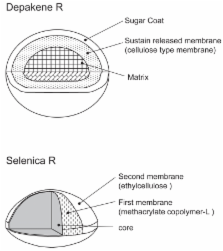 A study was conducted to establish the bioequivalence between different sustained-release formulations of valproic acid (Depakene R and Selenica R), which were developed in Japan.

The clinical investigation was designed in a randomized, crossover fashion with a single dose given to 12 healthy subjects. The subjects were administered a single 600 mg dose of valproic acid in one of two formulations. Serial venous blood samples were obtained over 72 hours after each administration to measure valproic acid in serum by enzyme immunoassay (EIA). In addition, a dissolution test was performed. Each sample was analyzed by an high-performance liquid chromatography to determine the dissolution rate of valproic acid.

No difference in maximum concentration or area under the curve was found between the two formulations. The time to maximum concentration of the new formation was significantly delayed compared with the conventional formulation (10.8 ± 1.7 versus 17.6 ± 1.8 hours, p < 0.001). Apparent clearance or elimination half-life did not differ between the two formulations. An in vitro dissolution study showed that Depakene R was significantly more dissoluble than Selenica R.

Based on the results, the present study demonstrated a significant difference between the two sustained-release formulations in the absorption profile, and also demonstrated that the bioavailability of valproic acid in the two formulations was similar but absorption speed (lag time) was very different.

Pharmacological and therapeutic properties of valproate: a summary after 35 years of clinical experience.

Emilio Perucca (2001)
Thirty-five years since its introduction into clinical use, valproate (valproic acid) has become the most widely prescribed antiepileptic drug (AED) worldwide. Its pharmacological effects involve a variety of mechanisms, including increased gamma-aminobutyric acid (GABA)-ergic transmission, reduced release and/or effects of excitatory amino acids, blockade of voltage-gated sodium channels and modulation of dopaminergic and serotoninergic transmission. Valproate is available in different dosage forms for parenteral and oral use. All available oral formulations are almost completely bioavailable, but they differ in dissolution characteristics and absorption rates. In particular, sustained-release formulations are available that minimise fluctuations in serum drug concentrations during a dosing interval and can therefore be given once or twice daily. Valproic acid is about 90% bound to plasma proteins, and the degree of binding decreases with increasing drug concentration within the clinically occurring range. Valproic acid is extensively metabolised by microsomal glucuronide conjugation, mitochondrial beta-oxidation and cytochrome P450-dependent omega-, (omega-1)- and (omega-2)-oxidation. The elimination half-life is in the order of 9 to 18 hours, but shorter values (5 to 12 hours) are observed in patients comedicated with enzyme-inducing agents such as phenytoin, carbamazepine and barbiturates. Valproate itself is devoid of enzyme-inducing properties, but it has the potential of inhibiting drug metabolism and can increase by this mechanism the plasma concentrations of certain coadministered drugs, including phenobarbital (phenobarbitone), lamotrigine and zidovudine. Valproate is a broad spectrum AED, being effective against all seizure types. In patients with newly diagnosed partial seizures (with or without secondary generalisation) and/or primarily generalised tonic-clonic seizures, the efficacy of valproate is comparable to that of phenytoin, carbamazepine and phenobarbital, although in most comparative trials the tolerability of phenobarbital was inferior to that of the other drugs. Valproate is generally regarded as a first-choice agent for most forms of idiopathic and symptomatic generalised epilepsies. Many of these syndromes are associated with multiple seizure types, including tonic-clonic, myoclonic and absence seizures, and prescription of a broad-spectrum drug such as valproate has clear advantages in this situation. A number of reports have also suggested that intravenous valproate could be of value in the treatment of convulsive and nonconvulsive status epilepticus, but further studies are required to establish in more detail the role of the drug in this indication. The most commonly reported adverse effects of valproate include gastrointestinal disturbances, tremor and bodyweight gain. Other notable adverse effects include encephalopathy symptoms (at times associated with hyperammonaemia), platelet disorders, pancreatitis, liver toxicity (with an overall incidence of 1 in 20,000, but a frequency as high as 1 in 600 or 1 in 800 in high-risk groups such as infants below 2 years of age receiving anticonvulsant polytherapy) and teratogenicity, including a 1 to 3% risk of neural tube defects. Some studies have also suggested that menstrual disorders and certain clinical, ultrasound or endocrine manifestations of reproductive system disorders, including polycystic ovary syndrome, may be more common in women treated with valproate than in those treated with other AEDs. However, the precise relevance of the latter findings remains to be evaluated in large, prospective, randomised studies.

G Zaccara,  A. Messori,  F. MORONI (1988)
Sodium valproate (valproic acid) has been widely used in the last decade and is now considered a relatively safe and effective anticonvulsant agent. Recently, several investigators have proposed its use in the treatment of anxiety, alcoholism and mood disorders, although these indications require further clinical studies. Valproic acid is available in different oral formulations such as solutions, tablets, enteric-coated capsules and slow-release preparations. For most of these formulations bio-availability approaches 100%, while the absorption half-life varies from less than 30 minutes to 3 or 4 hours depending on the type of preparation used. Once absorbed, valproic acid is largely bound to plasma proteins and has a relatively small volume of distribution (0.1 to 0.4 L/kg). Its concentration in CSF is approximately one-tenth that in plasma and is directly correlated with the concentration found in tears. At therapeutic doses, valproic acid half-life varies from 10 to 20 hours in adults, while it is significantly shorter (6 to 9 hours) in children. Valproic acid undergoes extensive liver metabolism. Numerous metabolites have been positively identified and there is reasonable evidence that several of them contribute to its pharmacological and toxic actions. In fact, several valproic acid metabolites have anti-convulsant properties, while many of the side effects it may cause (e.g. those related to hyperammonaemia or liver damage) are most often observed in patients previously treated with phenobarbitone. This could indicate that induction of liver enzymes is responsible for the formation of toxic valproic acid metabolites.