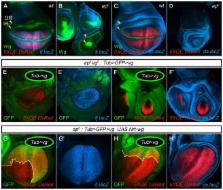 During development, the Drosophila wing primordium undergoes a dramatic increase in cell number and mass under the control of the long-range morphogens Wingless (Wg, a Wnt) and Decapentaplegic (Dpp, a BMP). This process depends in part on the capacity of wing cells to recruit neighboring, non-wing cells into the wing primordium. Wing cells are defined by activity of the selector gene vestigial ( vg) and recruitment entails the production of a vg-dependent “feed-forward signal” that acts together with morphogen to induce vg expression in neighboring non-wing cells. Here, we identify the protocadherins Fat (Ft) and Dachsous (Ds), the Warts-Hippo tumor suppressor pathway, and the transcriptional co-activator Yorkie (Yki, a YES associated protein, or YAP) as components of the feed-forward signaling mechanism, and we show how this mechanism promotes wing growth in response to Wg. We find that vg generates the feed-forward signal by creating a steep differential in Ft-Ds signaling between wing and non-wing cells. This differential down-regulates Warts-Hippo pathway activity in non-wing cells, leading to a burst of Yki activity and the induction of vg in response to Wg. We posit that Wg propels wing growth at least in part by fueling a wave front of Ft-Ds signaling that propagates vg expression from one cell to the next.

Under normal conditions, animals and their various body parts grow until they achieve a genetically predetermined size and shape—a process governed by secreted organizer proteins called morphogens. How morphogens control growth remains unknown. In Drosophila, wings develop at the larval stage from wing primordia. Recently, we discovered that the morphogen Wingless promotes growth of the Drosophila wing by inducing the recruitment of neighboring cells into the wing primordium. Wing cells are defined by the expression of the “selector” gene vestigial. Recruitment depends on the capacity of wing cells to send a short-range, feed-forward signal that allows Wingless to activate vestigial in adjacent non-wing cells. Here, we identify the molecular components and circuitry of the recruitment process. We define the protocadherins Fat and Dachsous as a bidirectional ligand-receptor system that is controlled by vestigial to generate the feed-forward signal. Further, we show that the signal is transduced by the conserved Warts-Hippo tumor suppressor pathway via activation of its transcriptional effector Yorkie. Finally, we propose that Wingless propels wing growth by fueling a wave front of Fat-Dachsous signaling and Yorkie activity that propagates vestigial expression from one cell to the next.

Brandon K. Harvey,  Nicolas Tapon (2007)
Intense research over the past four years has led to the discovery and characterization of a novel signalling network, known as the Salvador-Warts-Hippo (SWH) pathway, involved in tissue growth control in Drosophila melanogaster. At present, eleven proteins have been implicated as members of this pathway, and several downstream effector genes have been characterized. The importance of this pathway is emphasized by its evolutionary conservation, and by increasing evidence that its deregulation occurs in human tumours. Here, we review the main findings from Drosophila and the implications that these have for tumorigenesis in mammals.

Direct and long-range action of a wingless morphogen gradient.

G Struhl,  M Zecca,  K Basler (1996)
Wingless (Wg), a founding member of the Wingless/Int-1 (Wnt) family of secreted proteins, acts as a short-range inducer and as a long-range organizer during Drosophila development. Here, we determine the consequences of ectopically expressing (i) a wild-type form of Wg, (ii) a membrane-tethered form of Wg, and (iii) a constitutively active form of the cytosolic protein Armadillo (Arm), which normally acts to transduce Wg, and we compare them with the effects of removing endogenous Wg or Arm activity. Our results indicate that wild-type Wg acts at long range, up-regulating the transcription of particular target genes as a function of concentration and distance from secreting cells. In contrast, tethered Wg and Arm have only short-range or autonomous effects, respectively, on the transcription of these genes. We interpret these findings as evidence that Wg can act directly and at long range as a gradient morphogen during normal development.

K Basler,  G Struhl (1993)
The adult appendages of Drosophila are formed from imaginal discs, sheets of epithelial cells that proliferate during larval development and differentiate during metamorphosis. wingless (wg, DWnt-1) protein, a putative signaling molecule, is expressed only in prospective ventral cells in each of the leg discs. To test the role of wg, we have generated randomly positioned clones of cells that express wg protein constitutively. Clones that arise in the prospective ventral portions of the leg discs develop normally. In contrast, dorsally situated clones give rise to ventrolateral patterns and exert a ventralizing influence on neighboring wild-type tissue. We propose that wg protein organizes leg pattern along the dorsoventral axis by conferring ventral positional information within the disc.

Publisher ID: 09-PLBI-RA-2379R2
DOI: 10.1371/journal.pbio.1000386
PMC ID: 2879410
PubMed ID: 20532238
Copyright statement: Zecca, Struhl. This is an open-access article distributed under the terms of the Creative Commons Attribution License, which permits unrestricted use, distribution, and reproduction in any medium, provided the original author and source are credited.