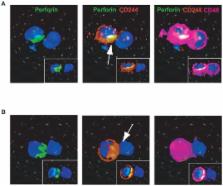 Human T-lymphotropic virus type I (HTLV-I) is a retrovirus that persistently infects 20 million people worldwide. The majority of infected individuals are asymptomatic carriers of the virus, but 5–10% of infected people develop either adult T cell leukemia/lymphoma (ATL) or a chronic, progressive neurological disease termed HTLV-I-associated myelopathy/tropical spastic paraparesis (HAM/TSP). HAM/TSP is characterized by central nervous system (CNS) inflammation including HTLV-I-specific CD8 + T cells where disease progression and pathogenesis is associated with a dysregulation of antigen-specific CD8 + T cells, although the mechanism of this dysregulation remains to be defined. Here we demonstrate that a signaling lymphocyte activation molecule (SLAM) family of receptors, CD244, was overexpressed on CD8 + T cells of HTLV-I-infected patients than those of healthy normal donors, and that the upregulation of the adaptor protein, SAP, in CD8 + T cells distinguished HTLV-I infected individuals with and without neurologic disease. Both CD244 and SAP were associated with effector functions (high expression of IFN-γ) of CD8 + T cells in patients with HAM/TSP. This finding has important implication for T cell-mediated pathogenesis in human chronic viral infection associated with imbalance of immune function.

Jonathan Allen,  C Sumen,  A. Joe Shaw … (1999)
The specialized junction between a T lymphocyte and an antigen-presenting cell, the immunological synapse, consists of a central cluster of T cell receptors surrounded by a ring of adhesion molecules. Immunological synapse formation is now shown to be an active and dynamic mechanism that allows T cells to distinguish potential antigenic ligands. Initially, T cell receptor ligands were engaged in an outermost ring of the nascent synapse. Transport of these complexes into the central cluster was dependent on T cell receptor-ligand interaction kinetics. Finally, formation of a stable central cluster at the heart of the synapse was a determinative event for T cell proliferation.

Detection and isolation of type C retrovirus particles from fresh and cultured lymphocytes of a patient with cutaneous T-cell lymphoma.

A Gazdar,  John Minna,  F Ruscetti … (1980)
Retrovirus particles with type C morphology were found in two T-cell lymphoblastoid cell lines, HUT 102 and CTCL-3, and in fresh peripheral blood lymphocytes obtained from a patient with a cutaneous T-cell lymphoma (mycosis fungoides). The cell lines continuously produce these viruses, which are collectively referred to as HTLV, strain CR(HTLV(CR)). Originally, the production of virus from HUT 102 cells required induction with 5-iodo-2'-deoxyuridine, but the cell line became a constitutive producer of virus at its 56th passage. Cell line CTCL-3 has been a constitutive producer of virus from its second passage in culture. Both mature and immature extracellular virus particles were seen in thin-section electron micrographs of fixed, pelleted cellular material; on occasion, typical type C budding virus particles were seen. No form of intracellular virus particle has been seen. Mature particles were 100-110 nm in diameter, consisted of an electron-dense core surrounded by an outer membrane separated by an electron-lucent region, banded at a density of 1.16 g/ml on a continuous 25-65% sucrose gradient, and contained 70S RNA and a DNA polymerase activity typical of viral reverse transcriptase (RT; RNA-dependent DNA nucleotidyltransferase). Under certain conditions of assay, HTLV(CR) RT showed cation preference for Mg(2+) over Mn(2+), distinct from the characteristics of cellular DNA polymerases purified from human lymphocytes and the RT from most type C viruses. Antibodies to cellular DNA polymerase gamma and anti-bodies against RT purified from several animal retroviruses failed to detectably interact with HTLV(CR) RT under conditions that were positive for the respective homologous DNA polymerase, demonstrating a lack of close relationship of HTLV(CR) RT to cellular DNA polymerases gamma or RT of these viruses. Six major proteins, with sizes of approximately 10,000, 13,000, 19,000, 24,000, 42,000, and 52,000 daltons, were apparent when doubly banded, disrupted HTLV(CR) particles were chromatographed on a NaDodSO(4)/polyacrylamide gel. The number of these particle-associated proteins is consistent with the expected proteins of a retrovirus, but the sizes of some are distinct from those of most known retroviruses of the primate subgroups.