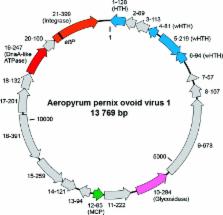 Journal: The Journal of General Virology

Guttaviridae is a family of enveloped viruses infecting hyperthermophilic archaea. The virions are ovoid or droplet-shaped, with a diameter of 55–80 nm and a length of 75–130 nm. The genome is a circular dsDNA molecule of around 14–20 kbp. The droplet-shaped morphology is unprecedented among viruses of bacteria and eukaryotes and represents a group of archaea-specific virion morphotypes. The family includes two genera, Alphaguttavirus and Betaguttavirus, each with a single species. This is a summary of the International Committee on Taxonomy of Viruses (ICTV) Report on the taxonomy of Guttaviridae, which is available at www.ictv.global/report/guttaviridae.

Jaime Iranzo,  Eugene V. Koonin,  David Prangishvili … (2016)
Archaea and particularly hyperthermophilic crenarchaea are hosts to many unusual viruses with diverse virion shapes and distinct gene compositions. As is typical of viruses in general, there are no universal genes in the archaeal virosphere. Therefore, to obtain a comprehensive picture of the evolutionary relationships between viruses, network analysis methods are more productive than traditional phylogenetic approaches. Here we present a comprehensive comparative analysis of genomes and proteomes from all currently known taxonomically classified and unclassified, cultivated and uncultivated archaeal viruses. We constructed a bipartite network of archaeal viruses that includes two classes of nodes, the genomes and gene families that connect them. Dissection of this network using formal community detection methods reveals strong modularity, with 10 distinct modules and 3 putative supermodules. However, compared to similar previously analyzed networks of eukaryotic and bacterial viruses, the archaeal virus network is sparsely connected. With the exception of the tailed viruses related to bacteriophages of the order Caudovirales and the families Turriviridae and Sphaerolipoviridae that are linked to a distinct supermodule of eukaryotic and bacterial viruses, there are few connector genes shared by different archaeal virus modules. In contrast, most of these modules include, in addition to viruses, capsidless mobile elements, emphasizing tight evolutionary connections between the two types of entities in archaea. The relative contributions of distinct evolutionary origins, in particular from nonviral elements, and insufficient sampling to the sparsity of the archaeal virus network remain to be determined by further exploration of the archaeal virosphere.

Yoshihiko Sako,  T Mochizuki,  David Prangishvili (2011)
By in silico analysis, we have identified two putative proviruses in the genome of the hyperthermophilic archaeon Aeropyrum pernix, and under special conditions of A. pernix growth, we were able to induce their replication. Both viruses were isolated and characterized. Negatively stained virions of one virus appeared as pleomorphic spindle-shaped particles, 180 to 210 nm by 40 to 55 nm, with tails of heterogeneous lengths in the range of 0 to 300 nm. This virus was named Aeropyrum pernix spindle-shaped virus 1 (APSV1). Negatively stained virions of the other virus appeared as slightly irregular oval particles with one pointed end, while in cryo-electron micrographs, the virions had a regular oval shape and uniform size (70 by 55 nm). The virus was named Aeropyrum pernix ovoid virus 1 (APOV1). Both viruses have circular, double-stranded DNA genomes of 38,049 bp for APSV1 and 13,769 bp for APOV1. Similarities to proteins of other archaeal viruses were limited to the integrase and Dna1-like protein. We propose to classify APOV1 into the family Guttaviridae.

SNDV, a novel virus of the extremely thermophilic and acidophilic archaeon Sulfolobus.

U Ziese,  Jarinke F. H. Arnold,  W Zillig (2000)
We describe a novel virus, SNDV (Sulfolobus neozealandicus droplet-shaped virus), of the crenarchaeotal archaeon Sulfolobus, which was found in a carrier state in a Sulfolobus strain isolated from a field sample from New Zealand. SNDV particles are droplet-shaped and densely covered by thin tail fibers at their pointed ends. The virion consists of a core and a coat. The latter has the appearance of a beehive and has a surface that is either helically ribbed or a stack of hoops. The genome is cccDNA of 20 kb, which is modified by dam-like methylation. It is cleaved by only a few type II restriction enzymes e.g., DpnI but not MboI, demonstrating an N(6)-methylation of the adenine residue in GATC sequences. The DNA-modifying system differentiates between virus and host. We postulate a virus-encoded methylase that is active on hemimethylated DNA. The host range of SNDV is confined to few Sulfolobus strains from New Zealand. The virus persists in an unstable carrier state rather than as a prophage. Due to its uniqueness we propose to assign it to a novel virus family termed Guttaviridae. Copyright 2000 Academic Press.