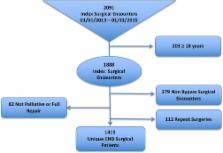 Patients with congenital heart disease are at risk of motor, cognitive, speech, and feeding difficulties after cardiac surgery. Rehabilitation therapy could improve functional outcomes in this population if applied in the acute postcardiac surgical in‐hospital stay. However, information on the types of acute postcardiac surgery therapy needs in children is scarce. Our goal was to describe rehabilitation therapy following congenital heart surgery and pre/intraoperative factors associated with need for therapy.

Nearly half of patients who underwent post–congenital heart surgery received rehabilitation therapy. Frequency of use and types of therapy vary according to patient characteristics; however, certain pre‐ and intraoperative factors are associated with need for rehabilitation therapy, and may aid decision‐making for appropriate resource allocation.

Gerhard-Paul Diller,  Lorna Swan,  Konstantinos Dimopoulos … (2012)
We aimed to investigate the distribution of exercise capacity across the spectrum of adult congenital heart disease (ACHD) using own data and the published experience and to provide diagnosis, gender-, and age- specific reference values. Publications describing exercise capacity in ACHD patients using cardiopulmonary exercise testing (CPET) were identified (n = 2286 patients in 23 papers). In addition, we included 2129 patients who underwent CPET at our own institution. The majority of patients (80%) had reduced peak oxygen uptake (peak VO(2)) compared with normal values (defined as <90% of predicted peak VO(2)). There were significant differences in peak VO(2) between subgroups of patients, with the lowest values seen in patients with Eisenmenger syndrome and complex heart disease. However, even in patients with simple lesions, peak VO(2) was on average significantly reduced compared with normal values. Based on a large number of observations we herewith provide gender- and age-specific peak VO(2) centile plots for the most common lesions (Tetralogy of Fallot, systemic right ventricle, Ebstein anomaly and Fontan-palliation) and relate disease-specific exercise capacity to that required for specific activities of daily life, sports, and occupations. We provide age-, gender-, and diagnosis-specific data on peak VO(2) levels across the spectrum of ACHD allowing to compare the exercise capacity of individual patients with that of their peer patients. These data should be helpful in interpreting CPET results, guiding therapy, and advising patients on activities of daily life, sports participation, and choice of occupation.

Greet Hermans,  Bernard De Jonghe,  Frans Bruyninckx … (2014)
Critical illness polyneuropathy or myopathy (CIP/CIM) is a frequent complication in the intensive care unit (ICU) and is associated with prolonged mechanical ventilation, longer ICU stay and increased mortality. This is an interim update of a review first published in 2009 (Hermans 2009). It has been updated to October 2011, with further potentially eligible studies from a December 2013 search characterised as awaiting assessment. To systematically review the evidence from RCTs concerning the ability of any intervention to reduce the incidence of CIP or CIM in critically ill individuals. On 4 October 2011, we searched the Cochrane Neuromuscular Disease Group Specialized Register, CENTRAL, MEDLINE, and EMBASE. We checked the bibliographies of identified trials and contacted trial authors and experts in the field. We carried out an additional search of these databases on 6 December 2013 to identify recent studies. All randomised controlled trials (RCTs), examining the effect of any intervention on the incidence of CIP/CIM in people admitted to adult medical or surgical ICUs. The primary outcome was the incidence of CIP/CIM in ICU, based on electrophysiological or clinical examination. Secondary outcomes included duration of mechanical ventilation, duration of ICU stay, death at 30 and 180 days after ICU admission and serious adverse events from the treatment regimens. Two authors independently extracted the data and assessed the risk of bias in included studies. We identified five trials that met our inclusion criteria. Two trials compared intensive insulin therapy (IIT) to conventional insulin therapy (CIT). IIT significantly reduced CIP/CIM in the screened (n = 825; risk ratio (RR) 0.65, 95% confidence interval (CI) 0.55 to 0.77) and total (n = 2748; RR 0.70, 95% CI 0.60 to 0.82) population randomised. IIT reduced duration of mechanical ventilation, ICU stay and 180-day mortality, but not 30-day mortality compared with CIT. Hypoglycaemia increased with IIT but did not cause early deaths.One trial compared corticosteroids with placebo (n = 180). The trial found no effect of treatment on CIP/CIM (RR 1.27, 95% CI 0.77 to 2.08), 180-day mortality, new infections, glycaemia at day seven, or episodes of pneumonia, but did show a reduction of new shock events.In the fourth trial, early physical therapy reduced CIP/CIM in 82/104 evaluable participants in ICU (RR 0.62. 95% CI 0.39 to 0.96). Statistical significance was lost when we performed a full intention-to-treat analysis (RR 0.81, 95% CI 0.60 to 1.08). Duration of mechanical ventilation but not ICU stay was significantly shorter in the intervention group. Hospital mortality was not affected but 30- and 180-day mortality results were not available. No adverse effects were noticed.The last trial found a reduced incidence of CIP/CIM in 52 evaluable participants out of a total of 140 who were randomised to electrical muscle stimulation (EMS) versus no stimulation (RR 0.32, 95% CI 0.10 to 1.01). These data were prone to bias due to imbalances between treatment groups in this subgroup of participants. After we imputed missing data and performed an intention-to-treat analysis, there was still no significant effect (RR 0.94, 95% CI 0.78 to 1.15). The investigators found no effect on duration of mechanical ventilation and noted no difference in ICU mortality, but did not report 30- and 180-day mortality.We updated the searches in December 2013 and identified nine potentially eligible studies that will be assessed for inclusion in the next update of the review. There is moderate quality evidence from two large trials that intensive insulin therapy reduces CIP/CIM, and high quality evidence that it reduces duration of mechanical ventilation, ICU stay and 180-day mortality, at the expense of hypoglycaemia. Consequences and prevention of hypoglycaemia need further study. There is moderate quality evidence which suggests no effect of corticosteroids on CIP/CIM and high quality evidence that steroids do not affect secondary outcomes, except for fewer new shock episodes. Moderate quality evidence suggests a potential benefit of early rehabilitation on CIP/CIM which is accompanied by a shorter duration of mechanical ventilation but without an effect on ICU stay. Very low quality evidence suggests no effect of EMS, although data are prone to bias. Strict diagnostic criteria for CIP/CIM are urgently needed for research purposes. Large RCTs need to be conducted to further explore the role of early rehabilitation and EMS and to develop new preventive strategies.