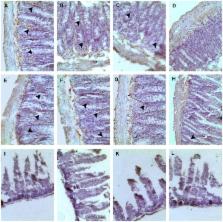 The present study was conducted to investigate the effects of maternal zearalenone (ZEN) exposure on the intestine of pregnant Sprague-Dawley (SD) rats and its offspring. Ninety-six pregnant SD rats were randomly divided into four groups and were fed with diets containing ZEN at concentrations of 0.3 mg/kg, 48.5 mg/kg, 97.6 mg/kg or 146.0 mg/kg from gestation days (GD) 1 to 7. All rats were fed with mycotoxin-free diet until their offspring were weaned at three weeks of age. The small intestinal fragments from pregnant rats at GD8, weaned dams and pups were collected and studied for toxic effects of ZEN on antioxidant status, immune response, expression of junction proteins, and morphology. The results showed that ZEN induced oxidative stress, affected the villous structure and reduced the expression of junction proteins claudin-4, occludin and connexin43 (Cx43) in a dose-dependent manner in pregnant rats. Different effects on the expression of cytokines were also observed both in mRNA and protein levels in these pregnant groups. Ingestion of high levels of ZEN caused irreversible damage in weaned dams, such as oxidative stress, decreased villi hight and low expression of junction proteins and cytokines. Decreased expression of jejunal interleukin-8 (IL-8) and increased expression of gastrointestinal glutathione peroxidase (GPx2) mRNA were detected in weaned offspring, indicating long-term damage caused by maternal ZEN. We also found that the Nrf2 expression both in mRNA and protein levels were up-regulated in the ZEN-treated groups of pregnant dams and the high-dose of ZEN group of weaned dams. The data indicate that modulation of Nrf2-mediated pathway is one of mechanism via which ZEN affects gut wall antioxidant and inflammatory responses.

Review on the toxicity, occurrence, metabolism, detoxification, regulations and intake of zearalenone: an oestrogenic mycotoxin.

J Moltó,  Jordi Mañes,  J Soriano … (2006)
Zearalenone (ZEA) is a mycotoxin produced mainly by fungi belonging to the genus Fusarium in foods and feeds. It is frequently implicated in reproductive disorders of farm animals and occasionally in hyperoestrogenic syndromes in humans. There is evidence that ZEA and its metabolites possess oestrogenic activity in pigs, cattle and sheep. However, ZEA is of a relatively low acute toxicity after oral or interperitoneal administration in mice, rat and pig. The biotransformation for ZEA in animals involves the formation of two metabolites alpha-zearalenol (alpha-ZEA) and beta-zearalenol (beta-ZEA) which are subsequently conjugated with glucuronic acid. Moreover, ZEA has also been shown to be hepatotoxic, haematotoxic, immunotoxic and genotoxic. The exact mechanism of ZEA toxicity is not completely established. This paper gives an overview about the acute, subacute and chronic toxicity, reproductive and developmental toxicity, carcinogenicity, genotoxicity and immunotoxicity of ZEA and its metabolites. ZEA is commonly found on several foods and feeds in the temperate regions of Europe, Africa, Asia, America and Oceania. Recent data about the worldwide contamination of foods and feeds by ZEA are considered in this review. Due to economic losses engendered by ZEA and its impact on human and animal health, several strategies for detoxifying contaminated foods and feeds have been described in the literature including physical, chemical and biological process. Dietary intakes of ZEA were reported from few countries from the world. The mean dietary intakes for ZEA have been estimated at 20 ng/kgb.w./day for Canada, Denmark and Norway and at 30 ng/kgb.w./day for the USA. The Joint FAO/WHO Expert Committee on Food Additives (JECFA) established a provisional maximum tolerable daily intake (PMTDI) for ZEA of 0.5 microg/kg of body weight.

Some major mycotoxins and their mycotoxicoses--an overview.

Tom Richard (2007)
Mycotoxins likely have existed for as long as crops have been grown but recognition of the true chemical nature of such entities of fungal metabolism was not known until recent times. Conjecturally, there is historical evidence of their presence back as far as the time reported in the Dead Sea Scrolls. Evidence of their periodic, historical occurrence exists until the recognition of aflatoxins in the early 1960s. At that time mycotoxins were considered as a storage phenomenon whereby grains becoming moldy during storage allowed for the production of these secondary metabolites proven to be toxic when consumed by man and other animals. Subsequently, aflatoxins and mycotoxins of several kinds were found to be formed during development of crop plants in the field. The determination of which of the many known mycotoxins are significant can be based upon their frequency of occurrence and/or the severity of the disease that they produce, especially if they are known to be carcinogenic. Among the mycotoxins fitting into this major group would be the aflatoxins, deoxynivalenol, fumonisins, zearalenone, T-2 toxin, ochratoxin and certain ergot alkaloids. The diseases (mycotoxicoses) caused by these mycotoxins are quite varied and involve a wide range of susceptible animal species including humans. Most of these diseases occur after consumption of mycotoxin contaminated grain or products made from such grains but other routes of exposure exist. The diagnosis of mycotoxicoses may prove to be difficult because of the similarity of signs of disease to those caused by other agents. Therefore, diagnosis of a mycotoxicoses is dependent upon adequate testing for mycotoxins involving sampling, sample preparation and analysis.

This work was supported by National Basic Research Program (2012CB124703); the China Agriculture Research System (CARS-36); and Program for Innovative Research Team of Universities in Heilongjiang Province (2012TD003). The funders had no role in study design, data collection and analysis, decision to publish, or preparation of the manuscript.