The Lowest Radiation Dose Having Molecular Changes in the Living Body 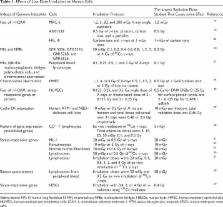 We herein attempted to identify the lowest radiation dose causing molecular changes in the living body. We investigated the effects of radiation in human cells, animals, and humans. DNA double-strand breaks (DSBs) formed in cells at γ- or X-ray irradiation doses between 1 mGy and 0.5 Gy; however, the extent of DSB formation differed depending on the cell species. The formation of micronuclei (MNs) and nucleoplasmic bridges (NPBs) was noted at radiation doses between 0.1 and 0.2 Gy. Stress-responsive genes were upregulated by lower radiation doses than those that induced DNA DSBs or MN and NPBs. These γ- or X-ray radiation doses ranged between approximately 10 and 50 mGy. In animals, chromosomal aberrations were detected between 50 mGy and 0.1 Gy of low linear energy transfer radiation, 0.1 Gy of metal ion beams, and 9 mGy of fast neutrons. In humans, DNA damage has been observed in children who underwent computed tomography scans with an estimated blood radiation dose as low as 0.15 mGy shortly after examination. The frequencies of chromosomal translocations were lower in residents of high background areas than in those of control areas. In humans, systemic adaptive responses may have been prominently expressed at these radiation doses.

K. Rothkamm, M Löbrich (2003)
DNA double-strand breaks (DSBs) are generally accepted to be the most biologically significant lesion by which ionizing radiation causes cancer and hereditary disease. However, no information on the induction and processing of DSBs after physiologically relevant radiation doses is available. Many of the methods used to measure DSB repair inadvertently introduce this form of damage as part of the methodology, and hence are limited in their sensitivity. Here we present evidence that foci of gamma-H2AX (a phosphorylated histone), detected by immunofluorescence, are quantitatively the same as DSBs and are capable of quantifying the repair of individual DSBs. This finding allows the investigation of DSB repair after radiation doses as low as 1 mGy, an improvement by several orders of magnitude over current methods. Surprisingly, DSBs induced in cultures of nondividing primary human fibroblasts by very low radiation doses (approximately 1 mGy) remain unrepaired for many days, in strong contrast to efficient DSB repair that is observed at higher doses. However, the level of DSBs in irradiated cultures decreases to that of unirradiated cell cultures if the cells are allowed to proliferate after irradiation, and we present evidence that this effect may be caused by an elimination of the cells carrying unrepaired DSBs. The results presented are in contrast to current models of risk assessment that assume that cellular responses are equally efficient at low and high doses, and provide the opportunity to employ gamma-H2AX foci formation as a direct biomarker for human exposure to low quantities of ionizing radiation.

M Fenech, M Kirsch-Volders, A Natarajan … (2011)
Micronuclei (MN) and other nuclear anomalies such as nucleoplasmic bridges (NPBs) and nuclear buds (NBUDs) are biomarkers of genotoxic events and chromosomal instability. These genome damage events can be measured simultaneously in the cytokinesis-block micronucleus cytome (CBMNcyt) assay. The molecular mechanisms leading to these events have been investigated over the past two decades using molecular probes and genetically engineered cells. In this brief review, we summarise the wealth of knowledge currently available that best explains the formation of these important nuclear anomalies that are commonly seen in cancer and are indicative of genome damage events that could increase the risk of developmental and degenerative diseases. MN can originate during anaphase from lagging acentric chromosome or chromatid fragments caused by misrepair of DNA breaks or unrepaired DNA breaks. Malsegregation of whole chromosomes at anaphase may also lead to MN formation as a result of hypomethylation of repeat sequences in centromeric and pericentromeric DNA, defects in kinetochore proteins or assembly, dysfunctional spindle and defective anaphase checkpoint genes. NPB originate from dicentric chromosomes, which may occur due to misrepair of DNA breaks, telomere end fusions, and could also be observed when defective separation of sister chromatids at anaphase occurs due to failure of decatenation. NBUD represent the process of elimination of amplified DNA, DNA repair complexes and possibly excess chromosomes from aneuploid cells.

Initial events in the cellular effects of ionizing radiations: clustered damage in DNA.

Dudley T. Goodhead (1993)
General correlations are found between the detailed spatial and temporal nature of the initial physical features of radiation insult and the likelihood of final biological consequences. These persist despite the chain of physical, chemical and biological processes that eliminate the vast majority of the early damage. Details of the initial conditions should provide guidance to critical features of the most relevant early biological damage and subsequent repair. Ionizing radiations produce many hundreds of different simple chemical products in DNA and also multitudes of possible clustered combinations. The simple products, including single-strand breaks, tend to correlate poorly with biological effectiveness. Even for initial double-strand breaks, as a broad class, there is apparently little or no increase in yield with increasing ionization density, in contrast with the large rise in relative biological effectiveness for cellular effects. Track structure analysis has revealed that clustered DNA damage of severity greater than simple double-strand breaks is likely to occur at biologically relevant frequencies with all ionizing radiations. Studies are in progress to describe in more detail the chemical nature of these clustered lesions and to consider the implications for cellular repair. It has been hypothesized that there is reduced repair of the more severe examples and that the spectrum of lesions that dominate the final cellular consequences is heavily skewed towards the more severe, clustered components.