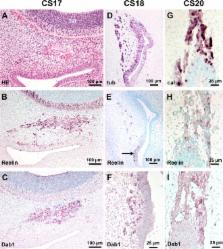 Reelin, an extracellular glycoprotein is essential for migration and correct positioning of neurons during development. Since the olfactory system is known as a source of various migrating neuronal cells, we studied Reelin expression in the two chemosensory olfactory systems, main and accessory, during early developmental stages of human foetuses/embryos from Carnegie Stage (CS) 15 to gestational week (GW) 14. From CS 15 to CS 18, but not at later stages, a transient expression of Reelin was detected first in the presumptive olfactory and then in the presumptive vomeronasal epithelium. During the same period, Reelin-positive cells detach from the olfactory/vomeronasal epithelium and migrate through the mesenchyme beneath the telencephalon. Dab 1, an adaptor protein of the Reelin pathway, was simultaneously expressed in the migratory mass from CS16 to CS17 and, at later stages, in the presumptive olfactory ensheathing cells. Possible involvements of Reelin and Dab 1 in the peripheral migrating stream are discussed.

T Hiesberger,  M Trommsdorff,  Rachel R. Hammer … (1999)
Layering of neurons in the cerebral cortex and cerebellum requires Reelin, an extracellular matrix protein, and mammalian Disabled (mDab1), a cytosolic protein that activates tyrosine kinases. Here, we report the requirement for two other proteins, cell surface receptors termed very low density lipoprotein receptor (VLDLR) and apolipoprotein E receptor 2 (ApoER2). Both receptors can bind mDab1 on their cytoplasmic tails and are expressed in cortical and cerebellar layers adjacent to layers that express Reelin. mDab1 expression is upregulated in knockout mice that lack both VLDLR and ApoER2. Inversion of cortical layers and absence of cerebellar foliation in these animals precisely mimic the phenotype of mice lacking Reelin or mDab1. These findings suggest that VLDLR and ApoER2 participate in transmitting the extracellular Reelin signal to intracellular signaling processes initiated by mDab1.

D Pfaff,  Donald W. Pfaff,  Andrew M. Fukuda (1989)
Neurons expressing luteinizing hormone-releasing hormone (LHRH), found in the septal-preoptic nuclei and hypothalamus, control the release of gonadotropic hormones from the anterior pituitary gland and facilitate reproductive behaviour. LHRH-expressing neurons are also found in the nervus terminalis, a cranial nerve that is a part of the accessory olfactory system and which projects directly from the nose to the septal-preoptic nuclei in the brain. During development, LHRH-immunoreactivity is detected in the peripheral parts of the nervus terminalis before it is found in the brain. Using a combination of LHRH immunocytochemistry and tritiated thymidine autoradiography in fetal mice, we show that LHRH neurons originate in the medial olfactory placode of the developing nose, migrate across the nasal septum and enter the forebrain with the nervus terminalis, arching into the septal-preoptic area and hypothalamus. Clinically, this migratory route for LHRH-expressing neurons could explain the deficiency of gonadotropins seen in 'Kallmann's syndrome' (hypogonadotropic hypogonadism with anosmia).

This study was supported in part by the Conseil Scientifique de la Faculté de Médecine de Strasbourg and by the Programme Hospitalier de Recherche Clinique, Hôpitaux Universitaires de Strasbourg. The funders had no role in study design, data collection and analysis, decision to publish, or preparetion of the manuscript.