The antimicrobial activity of nanoparticles: present situation and prospects for the future 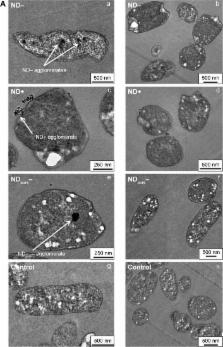 Nanoparticles (NPs) are increasingly used to target bacteria as an alternative to antibiotics. Nanotechnology may be particularly advantageous in treating bacterial infections. Examples include the utilization of NPs in antibacterial coatings for implantable devices and medicinal materials to prevent infection and promote wound healing, in antibiotic delivery systems to treat disease, in bacterial detection systems to generate microbial diagnostics, and in antibacterial vaccines to control bacterial infections. The antibacterial mechanisms of NPs are poorly understood, but the currently accepted mechanisms include oxidative stress induction, metal ion release, and non-oxidative mechanisms. The multiple simultaneous mechanisms of action against microbes would require multiple simultaneous gene mutations in the same bacterial cell for antibacterial resistance to develop; therefore, it is difficult for bacterial cells to become resistant to NPs. In this review, we discuss the antibacterial mechanisms of NPs against bacteria and the factors that are involved. The limitations of current research are also discussed.

Antibacterial activity and mechanism of action of the silver ion in Staphylococcus aureus and Escherichia coli.

Edward Koo,  Christopher Y. Park,  Ivana K. Kim … (2008)
The antibacterial effect and mechanism of action of a silver ion solution that was electrically generated were investigated for Staphylococcus aureus and Escherichia coli by analyzing the growth, morphology, and ultrastructure of the bacterial cells following treatment with the silver ion solution. Bacteria were exposed to the silver ion solution for various lengths of time, and the antibacterial effect of the solution was tested using the conventional plate count method and flow cytometric (FC) analysis. Reductions of more than 5 log(10) CFU/ml of both S. aureus and E. coli bacteria were confirmed after 90 min of treatment with the silver ion solution. Significant reduction of S. aureus and E. coli cells was also observed by FC analysis; however, the reduction rate determined by FC analysis was less than that determined by the conventional plate count method. These differences may be attributed to the presence of bacteria in an active but nonculturable (ABNC) state after treatment with the silver ion solution. Transmission electron microscopy showed considerable changes in the bacterial cell membranes upon silver ion treatment, which might be the cause or consequence of cell death. In conclusion, the results of the present study suggest that silver ions may cause S. aureus and E. coli bacteria to reach an ABNC state and eventually die.

Ae Jung Huh,  Y Kwon (2011)
Despite the fact that we live in an era of advanced and innovative technologies for elucidating underlying mechanisms of diseases and molecularly designing new drugs, infectious diseases continue to be one of the greatest health challenges worldwide. The main drawbacks for conventional antimicrobial agents are the development of multiple drug resistance and adverse side effects. Drug resistance enforces high dose administration of antibiotics, often generating intolerable toxicity, development of new antibiotics, and requests for significant economic, labor, and time investments. Recently, nontraditional antibiotic agents have been of tremendous interest in overcoming resistance that is developed by several pathogenic microorganisms against most of the commonly used antibiotics. Especially, several classes of antimicrobial nanoparticles (NPs) and nanosized carriers for antibiotics delivery have proven their effectiveness for treating infectious diseases, including antibiotics resistant ones, in vitro as well as in animal models. This review summarizes emerging efforts in combating against infectious diseases, particularly using antimicrobial NPs and antibiotics delivery systems as new tools to tackle the current challenges in treating infectious diseases. Copyright © 2011 Elsevier B.V. All rights reserved.

Mechanism of photogenerated reactive oxygen species and correlation with the antibacterial properties of engineered metal-oxide nanoparticles.

Yang Li,  Yongsheng Chen,  Junfeng Niu … (2012)
Oxidative stress induced by reactive oxygen species (ROS) is one of the most important antibacterial mechanisms of engineered nanoparticles (NPs). To elucidate the ROS generation mechanisms, we investigated the ROS production kinetics of seven selected metal-oxide NPs and their bulk counterparts under UV irradiation (365 nm). The results show that different metal oxides had distinct photogenerated ROS kinetics. Particularly, TiO(2) nanoparticles and ZnO nanoparticles generated three types of ROS (superoxide radical, hydroxyl radical, and singlet oxygen), whereas other metal oxides generated only one or two types or did not generate any type of ROS. Moreover, NPs yielded more ROS than their bulk counterparts likely due to larger surface areas of NPs providing more absorption sites for UV irradiation. The ROS generation mechanism was elucidated by comparing the electronic structures (i.e., band edge energy levels) of the metal oxides with the redox potentials of various ROS generation, which correctly interpreted the ROS generation of most metal oxides. To develop a quantitative relationship between oxidative stress and antibacterial activity of NPs, we examined the viability of E. coli cells in aqueous suspensions of NPs under UV irradiation, and a linear correlation was found between the average concentration of total ROS and the bacterial survival rates (R(2) = 0.84). Although some NPs (i.e., ZnO and CuO nanoparticles) released toxic ions that partially contributed to their antibacterial activity, this correlation quantitatively linked ROS production capability of NPs to their antibacterial activity as well as shed light on the applications of metal-oxide NPs as potential antibacterial agents.