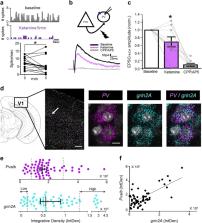 Ketamine has emerged as a widespread treatment for a variety of psychiatric disorders when used at sub-anesthetic doses, but the neural mechanisms underlying its acute action remain unclear. Here, we identified NMDA receptors containing the 2A subunit (GluN2A) on parvalbumin (PV)-expressing inhibitory interneurons as a pivotal target of low-dose ketamine. Genetically deleting GluN2A receptors globally or selectively from PV interneurons abolished the rapid enhancement of visual cortical responses and gamma-band oscillations by ketamine. Moreover, during the follicular phase of the estrous cycle in female mice, the ketamine response was transiently attenuated along with a concomitant decrease of grin2A mRNA expression within PV interneurons. Thus, GluN2A receptors on PV interneurons mediate the immediate actions of low-dose ketamine treatment, and fluctuations in receptor expression across the estrous cycle may underlie sex-differences in drug efficacy.

Imre Vida,  M Bartos,  Peter Jonas (2006)
Gamma frequency oscillations are thought to provide a temporal structure for information processing in the brain. They contribute to cognitive functions, such as memory formation and sensory processing, and are disturbed in some psychiatric disorders. Fast-spiking, parvalbumin-expressing, soma-inhibiting interneurons have a key role in the generation of these oscillations. Experimental analysis in the hippocampus and the neocortex reveals that synapses among these interneurons are highly specialized. Computational analysis further suggests that synaptic specialization turns interneuron networks into robust gamma frequency oscillators.

Panos Zanos,  Ruin Moaddel,  Patrick Morris … (2016)
Major depressive disorder afflicts ~16 percent of the world population at some point in their lives. Despite a number of available monoaminergic-based antidepressants, most patients require many weeks, if not months, to respond to these treatments, and many patients never attain sustained remission of their symptoms. The non-competitive glutamatergic N-methyl-D-aspartate receptor (NMDAR) antagonist, (R,S)-ketamine (ketamine), exerts rapid and sustained antidepressant effects following a single dose in depressed patients. Here we show that the metabolism of ketamine to (2S,6S;2R,6R)-hydroxynorketamine (HNK) is essential for its antidepressant effects, and that the (2R,6R)-HNK enantiomer exerts behavioural, electroencephalographic, electrophysiological and cellular antidepressant actions in vivo. Notably, we demonstrate that these antidepressant actions are NMDAR inhibition-independent but they involve early and sustained α-amino-3-hydroxy-5-methyl-4-isoxazole propionic acid (AMPA) receptor activation. We also establish that (2R,6R)-HNK lacks ketamine-related side-effects. Our results indicate a novel mechanism underlying ketamine’s unique antidepressant properties, which involves the required activity of a distinct metabolite and is independent of NMDAR inhibition. These findings have relevance for the development of next generation, rapid-acting antidepressants.