Analgesic Drug Development for Children: A History of Shortcomings … Until Now 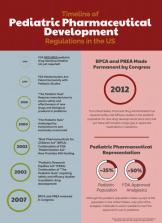 The challenge of developing pain medications for children: therapeutic needs and future perspectives

Mariëlle Eerdekens,  Christoph Beuter,  Claudia Lefeber … (2019)
Abstract It is broadly accepted that children of all age groups including (preterm) neonates and young infants can perceive pain and that there is an absolute need to treat their pain safely and effectively. The approved treatment options for children, particularly (preterm) neonates and young infants, are very limited with only a few medications specifically labelled for this population. This article presents the challenges of developing pain medications for children. A short overview gives information on pain in children, including pain perception, prevalence of pain and the long-term consequences of leaving pain untreated in this vulnerable population. Current pain management practices are briefly discussed. The challenges of conducting pediatric clinical trials in general and trials involving analgesic medications in particular within the regulatory framework available to develop these medications for children are presented. Emphasis is given to the operational hurdles faced in conducting a pediatric clinical trial program. Some suggestions to overcome these hurdles are provided based on our experience during the pediatric trial program for the strong analgesic tapentadol used for the treatment of moderate to severe acute pain.

Derek Muse,  Eva Tarau,  Claudia Lefeber … (2019)
Background: This trial is part of the global pediatric clinical development program investigating the administration of the strong analgesic tapentadol in children and adolescents. Patients and methods: The single site, open-label phase 2 trial evaluated the pharmacokinetic profile of tapentadol and its major metabolite, tapentadol-O-glucuronide, as well as safety and tolerability and efficacy of a single dose of tapentadol oral solution (1 mg/kg) in patients (2 to <18 years) undergoing dental, ear, nose, or throat surgery. Blood sampling and pain intensity measurements were conducted using age-appropriate schedules and rating scales, respectively. Adverse events were monitored throughout the trial. Results: Sixty-six patients were treated. They were stratified by age: Group 1 (12 to <18 years), n=21; Group 2 (6 to <12 years), n=28; and Groups 3 (3 to <6 years) and 4 (2 to <3 years), n=17. Serum tapentadol concentrations observed in these pediatric patients were within the range observed in adults after administration of a single tapentadol immediate-release dose (50–100 mg), whereas those of the metabolite tapentadol-O-glucuronide were within the same range or lower than in adults who received comparable single doses of tapentadol. Pain intensity improved over time across all age groups. The most common treatment-emergent adverse events were nausea (24.2%), vomiting (16.7%), dizziness (9.1%), and headache (6.1%). Conclusion: A single dose of tapentadol oral solution (1 mg/kg) administered to pediatric patients (2 to <18 years) resulted in serum tapentadol concentrations within the targeted range shown to be safe and efficacious in adults. Tapentadol demonstrated good tolerability and safety; within the limitations of the trial design, improvements in postsurgical pain intensity were observed across the age groups. Tapentadol may provide a new treatment option in the management of moderate to severe pediatric pain.

Julia C. Finkel,  Jutta Goldberg,  Ronald Rosenburg … (2019)
Background This is the first clinical trial in the global pediatric clinical development program for the use of the analgesic tapentadol in children and adolescents. Patients and methods This multicenter, open-label clinical trial investigated pharmacokinetics, safety and tolerability, and efficacy of tapentadol and its major metabolite tapentadol-O-glucuronide after administration of a single dose of tapentadol oral solution (OS) in pediatric patients aged 6 to <18 years experiencing moderate to severe acute pain after surgery. Efficacy (change in pain intensity after tapentadol intake) was assessed in an exploratory manner using the McGrath Color Analog Scale and Faces Pain Scale-Revised. Adverse events were monitored throughout the trial. Results Forty-four patients who received a single dose of 1 mg/kg tapentadol OS were included in this investigation. Maximum serum concentrations of tapentadol (111 ng/mL) and tapentadol-O-glucuronide (2,400 ng/mL) observed in this trial were within the range of individual maximum concentrations observed in healthy adults administered a comparable dose (range for tapentadol 23.2–129 ng/mL, for tapentadol-O-glucuronide 1,040–4,070 ng/mL). Following tapentadol administration, pain intensity scores improved from baseline at all timepoints. Treatment-emergent adverse events, none of which were serious, were experienced by 45.5% of the patients; the most commonly reported were vomiting (29.5%) and nausea (9.1%). Conclusions Tapentadol OS administered as a single dose of 1 mg/kg in children aged 6 to <18 years was generally well tolerated and produced similar serum concentrations as administration of 50–100 mg tapentadol immediate-release tablets in adults. A decrease in postsurgical pain was observed using exploratory subject-reported pain assessments. Tapentadol OS may provide a new treatment option in the management of moderate to severe acute pain in children and adolescents.