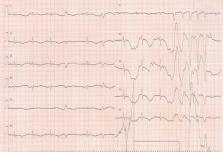 Spectrum and prevalence of mutations from the first 2,500 consecutive unrelated patients referred for the FAMILION long QT syndrome genetic test.

Jamie Kapplinger,  David J. Tester,  Benjamin A. Salisbury … (2009)
Long QT syndrome (LQTS) is a potentially lethal, highly treatable cardiac channelopathy for which genetic testing has matured from discovery to translation and now clinical implementation. Here we examine the spectrum and prevalence of mutations found in the first 2,500 unrelated cases referred for the FAMILION LQTS clinical genetic test. Retrospective analysis of the first 2,500 cases (1,515 female patients, average age at testing 23 +/- 17 years, range 0 to 90 years) scanned for mutations in 5 of the LQTS-susceptibility genes: KCNQ1 (LQT1), KCNH2 (LQT2), SCN5A (LQT3), KCNE1 (LQT5), and KCNE2 (LQT6). Overall, 903 referral cases (36%) hosted a possible LQTS-causing mutation that was absent in >2,600 reference alleles; 821 (91%) of the mutation-positive cases had single genotypes, whereas the remaining 82 patients (9%) had >1 mutation in > or =1 gene, including 52 cases that were compound heterozygous with mutations in >1 gene. Of the 562 distinct mutations, 394 (70%) were missense, 428 (76%) were seen once, and 336 (60%) are novel, including 92 of 199 in KCNQ1, 159 of 226 in KCNH2, and 70 of 110 in SCN5A. This cohort increases the publicly available compendium of putative LQTS-associated mutations by >50%, and approximately one-third of the most recently detected mutations continue to be novel. Although control population data suggest that the great majority of these mutations are pathogenic, expert interpretation of genetic test results will remain critical for effective clinical use of LQTS genetic test results.

Not all beta-blockers are equal in the management of long QT syndrome types 1 and 2: higher recurrence of events under metoprolol.

Efficacy of different beta-blockers in the treatment of long QT syndrome.