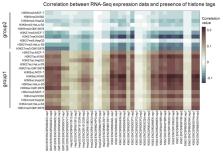 Background: Transposons are selfish genetic elements that self-reproduce in host DNA. They were active during evolutionary history and now occupy almost half of mammalian genomes. Close insertions of transposons reshaped structure and regulation of many genes considerably. Co-evolution of transposons and host DNA frequently results in the formation of new regulatory regions. Previously we published a concept that the proportion of functional features held by transposons positively correlates with the rate of regulatory evolution of the respective genes. Methods: We ranked human genes and molecular pathways according to their regulatory evolution rates based on high throughput genome-wide data on five histone modifications (H3K4me3, H3K9ac, H3K27ac, H3K27me3, H3K9me3) linked with transposons for five human cell lines. Results: Based on the total of approximately 1.5 million histone tags, we ranked regulatory evolution rates for 25075 human genes and 3121 molecular pathways and identified groups of molecular processes that showed signs of either fast or slow regulatory evolution. However, histone tags showed different regulatory patterns and formed two distinct clusters: promoter/active chromatin tags (H3K4me3, H3K9ac, H3K27ac) vs. heterochromatin tags (H3K27me3, H3K9me3). Conclusion: In humans, transposon-linked histone marks evolved in a coordinated way depending on their functional roles.

John Denu,  C. David Allis,  Y. Roth (2000)
Transcriptional regulation in eukaryotes occurs within a chromatin setting and is strongly influenced by nucleosomal barriers imposed by histone proteins. Among the well-known covalent modifications of histones, the reversible acetylation of internal lysine residues in histone amino-terminal domains has long been positively linked to transcriptional activation. Recent biochemical and genetic studies have identified several large, multisubunit enzyme complexes responsible for bringing about the targeted acetylation of histones and other factors. This review discusses our current understanding of histone acetyltransferases (HATs) or acetyltransferases (ATs): their discovery, substrate specificity, catalytic mechanism, regulation, and functional links to transcription, as well as to other chromatin-modifying activities. Recent studies underscore unexpected connections to both cellular regulatory processes underlying normal development and differentiation, as well as abnormal processes that lead to oncogenesis. Although the functions of HATs and the mechanisms by which they are regulated are only beginning to be understood, these fundamental processes are likely to have far-reaching implications for human biology and disease.

The transposable elements of the Drosophila melanogaster euchromatin: a genomics perspective