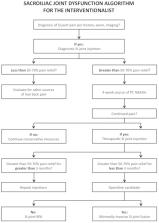 The sacroiliac joint (SIJ) has been estimated to contribute to pain in as much as 38% of cases of lower back pain. There are no clear diagnostic or treatment pathways. This article seeks to establish a clearer pathway and algorithm for treating patients.

Proposed criteria for diagnosis of sacroiliac joint dysfunction can include pain in the area of the sacroiliac joint, reproducible pain with provocative maneuvers, and pain relief with a local anesthetic injection into the SIJ. Conventional non-surgical therapies such as medications, physical therapy, radiofrequency denervation, and direct SI joint injections may have some limited durability in therapeutic benefit. Surgical fixation can be by a lateral or posterior/posterior oblique approach with the literature supporting minimally invasive options for improving pain and function and maintaining a low adverse event profile.

SIJ pain is felt to be an underdiagnosed and undertreated element of LBP. There is an emerging disconnect between the growing incidence of diagnosed SI pathology and underwhelming treatment efficacy of medical treatment. This has led to an increase in SI joint fixation. We have created a clearer diagnostic and treatment pathway to establish an algorithm for patients that can include conservative measures and interventional techniques once the diagnosis is identified.

Systemic Pharmacologic Therapies for Low Back Pain: A Systematic Review for an American College of Physicians Clinical Practice Guideline.

J Maigne,  A Aivaliklis,  F Pfefer (1996)
This prospective study consisted of the evaluation of a double sacroiliac block in patients with low back pain. To determine the prevalence of sacroiliac pain in a selected population of patients suffering from low back pain, and to assess certain pain provocation tests. Previous studies have implicated the sacroliac joint as a potential etiology of back and leg pain, but none has tested double anesthetic blocks in a prospective fashion. Fifty-four patients with unilateral low back pain, pain mapping compatible with a sacroiliac origin, tenderness over the sacroiliac joint, and no obvious source of pain in the lumbar spine were selected for a double anesthetic block. The procedure consisted of a through clinical examination with a visual analog scale, testing of sacroiliac pain provocation tests followed by a first screening block with a short-acting anesthetic. A second examination consisting of the same tests assessed the efficacy of the first block. If results were positive, a confirmatory block was performed. All blocks were performed under fluoroscopic guidance. Nineteen patients had a positive response to the first block. Among them, 10 (18.5%) were temporarily relieved by the confirmatory block. No pain provocation test reached statistical significance. The present study suggests the sacroiliac joint is an uncommon but real source of low back pain. The accuracy of some of the presumed "sacroiliac pain provocations tests" is questioned.

The relation between the transversus abdominis muscles, sacroiliac joint mechanics, and low back pain.

Funded by: no funding;
There were no funding sources for this article.