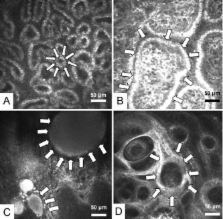 To evaluate the morphological changes of the meibomian glands (MG) in patients with meibomian gland dysfunction (MGD) compared to normal subjects by in vivo confocal microscopy and to investigate the relation of these changes to the clinical ocular surface findings and tear functions.

G N Foulks,  Anthony Bron (2003)
Although meibomian gland disease (MGD) is one of the most common disorders encountered in ophthalmic practice, there has been no descriptive system consistently accepted to clinically characterize the anatomical and correlative biochemical alterations that occur in this condition. The purpose of this review is to synthesize a clinical description of meibomian gland disease and to provide a scheme for diagnosis, classification, and quantification that will be of value in the clinical setting and in the conduct of clinical trials.