Intravenous vitamin C in the treatment of allergies: an interim subgroup analysis of a long-term observational study 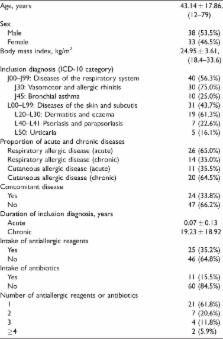 Oxidative stress appears to be a key factor in the pathogenesis of allergic diseases and a potential therapeutic target in allergy treatment. Allergic diseases are reportedly associated with reduced plasma levels of ascorbate, which is a key physiological antioxidant. Ascorbate prevents excessive inflammation without reducing the defensive capacity of the immune system.

An interim analysis of a multicenter, prospective, observational study was conducted to investigate the change in disease-specific and nonspecific symptoms (fatigue, sleep disorders, depression, and lack of mental concentration) during adjuvant treatment with intravenous vitamin C (Pascorbin®; Pascoe, Giessen, Germany) in 71 patients with allergy-related respiratory or cutaneous indications.

Our observations suggest that treatment with intravenous high-dose vitamin C reduces allergy-related symptoms. Our observations form a basis for planning a randomized controlled clinical trial to obtain more definitive evidence of the clinical relevance of our findings. We also obtained evidence of ascorbate deficiency in allergy-related diseases.

David I Brown,  Kathy K. Griendling (2009)
The NADPH oxidase (Nox) family of superoxide (O(2)(*-)) and hydrogen peroxide (H(2)O(2))-producing proteins has emerged as an important source of reactive oxygen species (ROS) in signal transduction. ROS produced by Nox proteins Nox1-5 and Duox1/2 are now recognized to play essential roles in the physiology of the brain, the immune system, the vasculature, and the digestive tract as well as in hormone synthesis. Nox-derived ROS have been implicated in regulation of cytoskeletal remodeling, gene expression, proliferation, differentiation, migration, and cell death. These processes are tightly controlled and reversible. In this review, we will discuss recent literature on Nox protein tissue distribution, subcellular localization, activation, and the resulting signal transduction mechanisms.

Ascorbate is an outstanding antioxidant in human blood plasma.

James Ames,  Jeremy L. England,  B Frei (1989)
We have shown recently that the temporal order of antioxidant consumption in human blood plasma exposed to a constant flux of aqueous peroxyl radicals is ascorbate = protein thiols greater than bilirubin greater than urate greater than alpha-tocopherol and that detectable lipid peroxidation starts only after ascorbate has been consumed completely. In this paper, we show that it is indeed ascorbate that completely protects plasma lipids against detectable peroxidative damage induced by aqueous peroxyl radicals and that ascorbate is the only plasma antioxidant that can do so. Plasma devoid of ascorbate, but no other endogenous antioxidant, is extremely vulnerable to oxidant stress and susceptible to peroxidative damage to lipids. The plasma proteins' thiols, although they become oxidized immediately upon exposure to aqueous peroxyl radicals, are inefficient radical scavengers and appear to be consumed mainly by autoxidation. Our data demonstrate that ascorbate is the most effective aqueous-phase antioxidant in human blood plasma and suggest that in humans ascorbate is a physiological antioxidant of major importance for protection against diseases and degenerative processes caused by oxidant stress.

James Ames,  B Frei,  R Stocker (1988)
The temporal disappearance in human blood plasma of endogenous antioxidants in relation to the appearance of various classes of lipid hydroperoxides measured by HPLC postcolumn chemiluminescence detection has been investigated under two types of oxidizing conditions. Exposure of plasma to aqueous peroxyl radicals generated at a constant rate leads immediately to oxidation of endogenous ascorbate and sulfhydryl groups, followed by sequential depletion of bilirubin, urate, and alpha-tocopherol. Stimulating polymorphonuclear leukocytes in plasma initiates very rapid oxidation of ascorbate, followed by partial depletion of urate. Once ascorbate is consumed completely, micromolar concentrations of hydroperoxides of plasma phospholipids, triglycerides, and cholesterol esters appear simultaneously, even though sulfhydryl groups, bilirubin, urate, and alpha-tocopherol are still present at high concentrations. Nonesterified fatty acids, the only lipid class in plasma not transported in lipoproteins but bound to albumin, are preserved from peroxidative damage even after complete oxidation of ascorbate, most likely due to site-specific antioxidant protection by albumin-bound bilirubin and possibly by albumin itself. Thus, in plasma ascorbate and, in a site-specific manner, bilirubin appear to be much more effective in protecting lipids from peroxidative damage by aqueous oxidants than all the other endogenous antioxidants. Hydroperoxides of linoleic acid, phosphatidylcholine, and cholesterol added to plasma in the absence of added reducing substrates are degraded, in contrast to hydroperoxides of trilinolein and cholesterol linoleate. These findings indicate the presence of a selective peroxidase activity operative under physiological conditions. Our data suggest that in states of leukocyte activation and other types of acute or chronic oxidative stress such a simple regimen as controlled ascorbate supplementation could prove helpful in preventing formation of lipid hydroperoxides, some of which cannot be detoxified by endogenous plasma activities and thus might cause damage to critical targets.