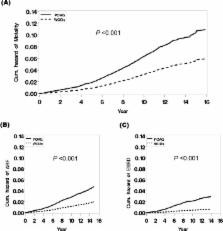 Using the Taiwan National Health Insurance Research Database between 1997 and 2011, 15 185 patients with a new diagnosis of POAG were enrolled and propensity score matched (1:1) with 15 185 patients without ocular disorders (WODs). All-cause mortality and major kidney events were analysed by a multivariate Cox proportional hazards regression model and a competing risk regression model.

Our data demonstrate that POAG is a risk of all-cause mortality, ARF and ESRD, thus needing to notice mortality and major kidney events in patients with new-onset POAG.

Effects of diabetes and level of glycemia on all-cause and cardiovascular mortality. The San Antonio Heart Study.

Xiu Wei,  S P Gaskill,  S. Haffner … (1998)
Although the level of hyperglycemia is clearly a risk factor for microvascular complications in diabetic patients, its role in macrovascular complications remains controversial. We followed 4,875 subjects (65% Mexican-American) for 7-8 years to investigate the effects of diabetes and hyperglycemia on all-cause and cardiovascular disease (CVD) mortality. These end points were also analyzed according to quartiles of baseline fasting plasma glucose among diabetic participants. The Cox proportional hazards model was used to estimate the relative risks (RRs) for all-cause and CVD mortality. Diabetes was significantly associated with increased all-cause mortality (RR [95% CI] = 2.1 [1.3-3.5] in men; 3.2 [1.9-5.4] in women) and increased CVD mortality (3.2 [1.4-7.1] in men; 8.5 [2.8-25.2] in women). Among diabetic subjects, those in quartile 4 had a 4.2-fold greater risk of all-cause mortality (P 6.2 mmol/l were significant predictors of CVD mortality using Cox models. We conclude that diabetes is a predictor of both all-cause and CVD mortality in the general population and that both hyperglycemia and common CVD risk factors are important predictors of all-cause and CVD mortality in diabetic subjects.