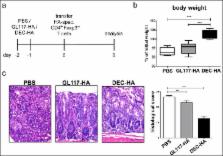 The endocytotic c-type lectin receptor DEC-205 is highly expressed on immature dendritic cells. In previous studies, it was shown that antigen-targeting to DEC-205 is a useful tool for the induction of antigen-specific Foxp3 + regulatory T cells and thereby can prevent inflammatory processes. However, whether this approach is sufficient to mediate tolerance in mucosal tissues like the gut is unknown. In this study, we established a new mouse model in which the adoptive transfer of naive hemagglutinin (HA)-specific CD4 +Foxp3 – T cells into VILLIN-HA transgenic mice leads to severe colitis. To analyze if antigen-targeting to DEC-205 could protect against inflammation of the gut, VILLIN-HA transgenic mice were injected with an antibody–antigen complex consisting of the immunogenic HA 110–120 peptide coupled to an α-DEC-205 antibody (DEC-HA) before adoptive T cell transfer. DEC-HA-treated mice showed significantly less signs of intestinal inflammation as was demonstrated by reduced loss of body weight and histopathology in the gut. Strikingly, abrogated intestinal inflammation was mediated via the conversion of naive HA-specific CD4 +Foxp3 – T cells into HA-specific CD4 +Foxp3 + regulatory T cells. In this study, we provide evidence that antigen-targeting to DEC-205 can be utilized for the induction of tolerance in mucosal organs that are confronted with large numbers of exogenous antigens.

Alexander Rudensky,  Jonas Fontenot,  Jeffrey P. Rasmussen … (2005)
Regulatory T cell-mediated dominant tolerance has been demonstrated to play an important role in the prevention of autoimmunity. Here, we present data arguing that the forkhead transcription factor Foxp3 acts as the regulatory T cell lineage specification factor and mediator of the genetic mechanism of dominant tolerance. We show that expression of Foxp3 is highly restricted to the subset alphabeta of T cells and, irrespective of CD25 expression, correlates with suppressor activity. Induction of Foxp3 expression in nonregulatory T cells does not occur during pathogen-driven immune responses, and Foxp3 deficiency does not impact the functional responses of nonregulatory T cells. Furthermore, T cell-specific ablation of Foxp3 is sufficient to induce the identical early onset lymphoproliferative syndrome observed in Foxp3-deficient mice. Analysis of Foxp3 expression during thymic development suggests that this mechanism is not hard-wired but is dependent on TCR/MHC ligand interactions.

Daniel Hawiger,  Kayo Inaba,  Yair Dorsett … (2001)
Dendritic cells (DCs) have the capacity to initiate immune responses, but it has been postulated that they may also be involved in inducing peripheral tolerance. To examine the function of DCs in the steady state we devised an antigen delivery system targeting these specialized antigen presenting cells in vivo using a monoclonal antibody to a DC-restricted endocytic receptor, DEC-205. Our experiments show that this route of antigen delivery to DCs is several orders of magnitude more efficient than free peptide in complete Freund's adjuvant (CFA) in inducing T cell activation and cell division. However, T cells activated by antigen delivered to DCs are not polarized to produce T helper type 1 cytokine interferon γ and the activation response is not sustained. Within 7 d the number of antigen-specific T cells is severely reduced, and the residual T cells become unresponsive to systemic challenge with antigen in CFA. Coinjection of the DC-targeted antigen and anti-CD40 agonistic antibody changes the outcome from tolerance to prolonged T cell activation and immunity. We conclude that in the absence of additional stimuli DCs induce transient antigen-specific T cell activation followed by T cell deletion and unresponsiveness.

D Wolf,  S Hanauer,  William J Sandborn … (2006)
Tumor necrosis factor blockade has been shown to be an effective treatment strategy in Crohn's disease (CD). Adalimumab is a human immunoglobulin G1 (IgG(1)) monoclonal antibody targeting tumor necrosis factor (TNF). A randomized, double-blind, placebo-controlled, dose-ranging trial was performed to evaluate the efficacy of adalimumab induction therapy in patients with CD. A total of 299 patients with moderate to severe CD naive to anti-TNF therapy were randomized to receive subcutaneous injections at weeks 0 and 2 with adalimumab 40 mg/20 mg, 80 mg/40 mg, or 160 mg/80 mg or placebo. The primary endpoint was demonstration of a significant difference in the rates of remission at week 4 (defined as a Crohn's Disease Activity Index score <150 points) among the 80 mg/40 mg, 160 mg/80 mg, and placebo groups. The rates of remission at week 4 in the adalimumab 40 mg/20 mg, 80 mg/40 mg, and 160 mg/80 mg groups were 18% (P = .36), 24% (P = .06), and 36% (P = .001), respectively, and 12% in the placebo group. Adverse events occurred at similar frequencies in all 4 treatment groups except injection site reactions, which were more common in adalimumab-treated patients. Adalimumab was superior to placebo for induction of remission in patients with moderate to severe Crohn's disease naive to anti-TNF therapy. The optimal induction dosing regimen for adalimumab in this study was 160 mg at week 0 followed by 80 mg at week 2. Adalimumab was well tolerated.

The authors declare no conflict of interest.