Determining anatomical position of the umbilicus in Iranian girls, and providing quantitative indices and formula to determine neo-umbilicus during abdominoplasty 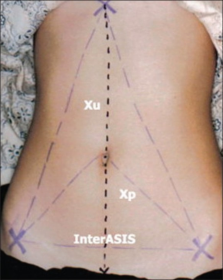 The umbilicus plays an important role in the aesthetic appearance of the abdomen. So, its restoration during reconstructive surgeries, such as an abdominoplasty, is a challenge. The aim of this study was to evaluate quantitative indices based on constant skeletal points in the anterior wall of abdomen in order to provide an appropriate site of a neo-umbilicus during an abdominoplasty.

In this descriptive, cross-sectional study, we enrolled 65 young adult girls (20–25 years old) who were nulliparous, nulligravid, and without any history of surgery. Weight, height, distance from xiphoid to umbilicus (Xu), distance from the pubic symphysis to xiphosternum (Xp), and anterior superior iliac spine (interASIS) distance of the subjects were measured. Data were analysed by SPSS ver. 16 using descriptive statistics and multiple regression tests in order to present a formula (equation).

By applying these quantitative methods, the natural site of neo-umbilicus could be determined. This may reduce practice errors and increase patient satisfaction. In addition, these findings provide plausible evidence to defend against possible legal complaints.

Placement of the umbilicus in an abdominoplasty.

D Ousterhout,  R Dubou (1978)
The location of the umbilicus was measured in 100 randomly selected non-obese subjects. It was found that a line drawn from the highest level of the crest of one ilium to the same point on the other side will transect the umbilicus in 96 percent of the subjects. This relationship can be of use during an abdominoplasty, when determining the location for the umbilicus.

Anatomical localization of the umbilicus: an Indian study.

Is the umbilicus truly midline? Clinical and medicolegal implications.

Diane Gibby,  Karen A. Brown,  E. Sorokin … (2003)
A common misconception is that the umbilicus is a midline structure. To date, an anatomical survey examining whether the umbilicus is located at the midline has not been reported. This study measured the position of the umbilicus among 136 subjects, in two separate experiments. The results demonstrated that the umbilicus was not at the midline for nearly 100 percent of subjects and was more than 2 percent from the midline for more than 50 percent of subjects. This finding is of great importance for patient counseling in preoperative and postoperative settings. Because the discerning eye has repeatedly been demonstrated to be able to detect smaller asymmetries, these findings are significant and should be discussed with patients undergoing cosmetic abdominoplasty or reconstructive procedures, for preoperative informed consent. Education and preoperative demonstration can help prevent medicolegal ramifications. The umbilicus is rarely midline and, when critically analyzed, is located lateral to the midline axis more often than not.