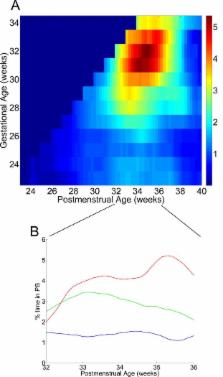 Periodic breathing (PB) is a normal immature breathing pattern in neonates that, if extreme, may be associated with pathologic conditions.

We used our automated PB detection system to analyze all bedside monitor chest impedance data on all infants <35 weeks’ gestation in the University of Virginia Neonatal Intensive Care Unit from 2009-2014 (n=1211). Percent time spent in PB was calculated hourly (>50 infant-years’ data). Extreme PB was identified as a 12h period with PB >6 standard deviations above the mean for gestational age (GA) and post-menstrual age (PMA) and >10% time in PB.

PB increased with GA, with the highest amount in infants 30-33 weeks’ GA at about 2 weeks’ chronologic age. Extreme PB was identified in 76 infants and in 45% was temporally associated with clinical events including infection or necrotizing enterocolitis (NEC), immunizations, or caffeine discontinuation. In 8/28 cases of septicemia and 10/21 cases of NEC there was a >2-fold increase in %PB over baseline in the day prior to diagnosis.

Infants <35 weeks GA spend, on average, <6% of the time in PB. An acute increase in PB may reflect illness or physiological stressors or may occur without any apparent clinical event.

The induced prostaglandin E2 pathway is a key regulator of the respiratory response to infection and hypoxia in neonates.

The late preterm infant and the control of breathing, sleep, and brainstem development: a review.

Robert Darnall,  Hannah C. Kinney,  Ronald L Ariagno (2006)
The brainstem development of infants born between 33 and 38 weeks' gestation is less mature than that of a full-term infant. During late gestation, there are dramatic and nonlinear developmental changes in the brainstem. This translates into immaturity of upper airway and lung volume control, laryngeal reflexes, chemical control of breathing, and sleep mechanisms. Ten percent of late preterm infants have significant apnea of prematurity and they frequently have delays in establishing coordination of feeding and breathing. Unfortunately, there is a paucity of clinical, physiologic, neuroanatomic, and neurochemical data in this specific group of infants. Research focused on this group of infants will not only further our understanding of brainstem maturation during this high risk period, but will help develop focused plans for their management.

P Valko,  George D. Hermann,  C Bassetti … (2008)
The aims of our study were 1) to better characterize central periodic breathing during sleep (CPBS) and its clinical relevance in acute stroke, 2) to better define the role of brain damage in its pathogenesis. We included 74 consecutive patients admitted within 96 hours after stroke onset. Stroke severity at admission, stroke outcome at discharge and stroke topography were assessed. ECG and transesophageal echocardiography were performed. Nocturnal breathing was assessed with an ambulatory device the first night after admission. CPBS severity was represented as absolute time and percentage of recording time. Age was 63 +/- 13 (25-82), 49 (66 %) were male. Thirty (41 %) patients showed CPBS during >or= 10 % and 7 (9 %) during >or= 50 % of recording time. CPBS severity was associated with age (p = 0.017), stroke severity (p = 0.008), ECG abnormalities (p = 0.005) and lower left ventricular ejection fraction (p < 0.0001). CPBS severity was higher in patients with extensive hemispheric strokes (n = 6, p < 0.0001), and lower in patients with partial strokes involving the left insula (n = 5, p < 0.0001) and the mesencephalon (n = 5, p = 0.002). CPBS is frequent in acute ischemic stroke and is associated with older age, stroke severity/extension, and lower left ventricular function. The lower occurrence of CPBS in left insular and mesencephalic stroke suggests a major role of distinct brain areas in the modulation of respiratory phenomena accompanying acute stroke.