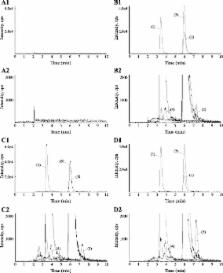 This study aimed to develop a simultaneous determination method for tramadol and its desmethylates in human plasma using isocratic liquid chromatography coupled to tandem mass spectrometry and to validate it for pharmacokinetic evaluation in patients with cancer pain or non-cancer pain.

The pretreatments for human plasma involved protein precipitation using acetonitrile and methanol under basic conditions. Tramadol, O-desmethylate, N-desmethylate, and N,O-didesmethylate were separated on an octadecylsilyl column filled with 3-μm particles using isocratic mixture of methanol and 0.15 % formic acid in water (35:65, v/v). The mass spectrometer was run in positive ion multiple reaction monitoring mode. This method was applied to the determination of plasma samples in patients treated with oral tramadol.

The present method with acceptable analytical performance can be helpful for evaluating the pharmacokinetics of oral tramadol, including the determination of its desmethylates, for patients with cancer pain or non-cancer pain in clinical settings.

Armin Sablotzki,  Stefan Grond (2003)
Tramadol, a centrally acting analgesic structurally related to codeine and morphine, consists of two enantiomers, both of which contribute to analgesic activity via different mechanisms. (+)-Tramadol and the metabolite (+)-O-desmethyl-tramadol (M1) are agonists of the mu opioid receptor. (+)-Tramadol inhibits serotonin reuptake and (-)-tramadol inhibits norepinephrine reuptake, enhancing inhibitory effects on pain transmission in the spinal cord. The complementary and synergistic actions of the two enantiomers improve the analgesic efficacy and tolerability profile of the racemate. Tramadol is available as drops, capsules and sustained-release formulations for oral use, suppositories for rectal use and solution for intramuscular, intravenous and subcutaneous injection. After oral administration, tramadol is rapidly and almost completely absorbed. Sustained-release tablets release the active ingredient over a period of 12 hours, reach peak concentrations after 4.9 hours and have a bioavailability of 87-95% compared with capsules. Tramadol is rapidly distributed in the body; plasma protein binding is about 20%. Tramadol is mainly metabolised by O- and N-demethylation and by conjugation reactions forming glucuronides and sulfates. Tramadol and its metabolites are mainly excreted via the kidneys. The mean elimination half-life is about 6 hours. The O-demethylation of tramadol to M1, the main analgesic effective metabolite, is catalysed by cytochrome P450 (CYP) 2D6, whereas N-demethylation to M2 is catalysed by CYP2B6 and CYP3A4. The wide variability in the pharmacokinetic properties of tramadol can partly be ascribed to CYP polymorphism. O- and N-demethylation of tramadol as well as renal elimination are stereoselective. Pharmacokinetic-pharmacodynamic characterisation of tramadol is difficult because of differences between tramadol concentrations in plasma and at the site of action, and because of pharmacodynamic interactions between the two enantiomers of tramadol and its active metabolites. The analgesic potency of tramadol is about 10% of that of morphine following parenteral administration. Tramadol provides postoperative pain relief comparable with that of pethidine, and the analgesic efficacy of tramadol can further be improved by combination with a non-opioid analgesic. Tramadol may prove particularly useful in patients with a risk of poor cardiopulmonary function, after surgery of the thorax or upper abdomen and when non-opioid analgesics are contraindicated. Tramadol is an effective and well tolerated agent to reduce pain resulting from trauma, renal or biliary colic and labour, and also for the management of chronic pain of malignant or nonmalignant origin, particularly neuropathic pain. Tramadol appears to produce less constipation and dependence than equianalgesic doses of strong opioids.

Tramadol: a review of its use in perioperative pain.

Jane A. Scott,  Marc Perry (2000)
Tramadol is a synthetic, centrally acting analgesic agent with 2 distinct, synergistic mechanisms of action, acting as both a weak opioid agonist and an inhibitor of monoamine neurotransmitter reuptake. The 2 enantiomers of racemic tramadol function in a complementary manner to enhance the analgesic efficacy and improve the tolerability profile of tramadol. In several comparative, well designed studies, oral and parenteral tramadol effectively relieved moderate to severe postoperative pain associated with surgery. Its overall analgesic efficacy was similar to that of morphine or alfentanil and superior to that of pentazocine. Tramadol provided effective analgesia in children and in adults for both inpatient and day surgery. Tramadol was generally well tolerated in clinical trials. The most common adverse events (incidence of 1.6 to 6.1%) were nausea, dizziness, drowsiness, sweating, vomiting and dry mouth. Importantly, unlike other opioids, tramadol has no clinically relevant effects on respiratory or cardiovascular parameters at recommended doses in adults or children. Tramadol also has a low potential for abuse or dependence. The efficacy of tramadol for the management of moderate to severe postoperative pain has been demonstrated in both inpatients and day surgery patients. Most importantly, unlike other opioids, tramadol has no clinically relevant effects on respiratory or cardiovascular parameters. Tramadol may prove particularly useful in patients with poor cardiopulmonary function, including the elderly, the obese and smokers, in patients with impaired hepatic or renal function, and in patients in whom nonsteroidal anti-inflammatory drugs are not recommended or need to be used with caution. Parenteral or oral tramadol has proved to be an effective and well tolerated analgesic agent in the perioperative setting.

Tramadol. A preliminary review of its pharmacodynamic and pharmacokinetic properties, and therapeutic potential in acute and chronic pain states.

Jeffrey D McTavish,  E Sorkin,  Jean C. Lee (1993)
Tramadol is a centrally acting analgesic which possesses opioid agonist properties and activates monoaminergic spinal inhibition of pain. It may be administered orally, rectally, intravenously or intramuscularly. In patients with moderate to severe postoperative pain, intravenous or intramuscular tramadol has generally proved to be of equivalent potency to pethidine (meperidine) and one-fifth as potent as nalbuphine. Intravenous tramadol 50 to 150mg was equivalent in analgesic efficacy to morphine 5 to 15mg in patients with moderate pain following surgery; however, when administered epidurally tramadol was one-thirtieth as potent as morphine. Tramadol has demonstrated efficacy in a few studies in the short term treatment of chronic pain of various origins. Orally administered tramadol was found to be an effective analgesic in step 2 of the World Health Organization's guidelines for the treatment of patients with cancer pain. Tramadol is well tolerated in short term use with dizziness, nausea, sedation, dry mouth and sweating being the principal adverse effects. Respiratory depression has been observed in only a few patients after tramadol infusion anaesthesia. When used for pain relief during childbirth, intravenously administered tramadol did not cause respiratory depression in neonates. The tolerance and dependence potential of tramadol during treatment for up to 6 months appears to be low, although the possibility of dependence with long term use cannot be entirely excluded. Thus, evidence to date of the analgesic effectiveness of tramadol combined with a low respiratory depressant effect and low dependence potential in short term use, suggests that the drug may become a useful alternative to the opioid analgesics currently available for the treatment of patients with moderately severe acute or chronic pain.