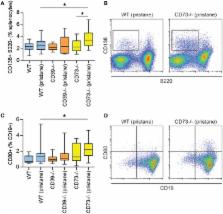 CD39 and CD73 are surface enzymes that jut into the extracellular space where they mediate the step-wise phosphohydrolysis of the autocrine and paracrine danger signals ATP and ADP into anti-inflammatory adenosine. Given the role of vascular and immune cells’ “purinergic halo” in maintaining homeostasis, we hypothesized that the ectonucleotidases CD39 and CD73 might play a protective role in lupus.

As compared with WT mice, CD39 −/− mice developed exaggerated splenomegaly in response to pristane, while both groups of ectonucleotidase-deficient mice demonstrated heightened anti-ribonucleoprotein production. The administration of pristane to WT mice triggered only subtle dysfunction of the arterial endothelium; however, both CD39 −/− and CD73 −/− mice demonstrated striking endothelial dysfunction following induction of lupus, which could be reversed by superoxide dismutase. Activated B cells and plasma cells were expanded in CD73 −/− mice, while deficiency of either ectonucleotidase led to expansion of T H17 cells. CD39 −/− and CD73 −/− mice demonstrated exaggerated neutrophil extracellular trap release, while CD73 −/− mice additionally had higher levels of plasma cell-free DNA.

These data are the first to link ectonucleotidases with lupus autoimmunity and vascular disease. New therapeutic strategies may harness purinergic nucleotide dissipation or signaling to limit the damage inflicted upon organs and blood vessels by lupus.

Linda F. Thompson,  Holger Eltzschig,  Juan Ibla … (2004)
Extracellular adenosine has been widely implicated in adaptive responses to hypoxia. The generation of extracellular adenosine involves phosphohydrolysis of adenine nucleotide intermediates, and is regulated by the terminal enzymatic step catalyzed by ecto-5′-nucleotidase (CD73). Guided by previous work indicating that hypoxia-induced vascular leakage is, at least in part, controlled by adenosine, we generated mice with a targeted disruption of the third coding exon of Cd73 to test the hypothesis that CD73-generated extracellular adenosine functions in an innate protective pathway for hypoxia-induced vascular leakage. Cd73 −/− mice bred and gained weight normally, and appeared to have an intact immune system. However, vascular leakage was significantly increased in multiple organs, and after subjection to normobaric hypoxia (8% O2), Cd73 −/− mice manifested fulminant vascular leakage, particularly prevalent in the lung. Histological examination of lungs from hypoxic Cd73 −/− mice revealed perivascular interstitial edema associated with inflammatory infiltrates surrounding larger pulmonary vessels. Vascular leakage secondary to hypoxia was reversed in part by adenosine receptor agonists or reconstitution with soluble 5′-nucleotidase. Together, our studies identify CD73 as a critical mediator of vascular leakage in vivo.

Charles Drake,  Jeanne Kowalski,  Joel Linden … (2008)
Tissue-derived adenosine, acting via the adenosine A(2A) receptor (A(2A)R), is emerging as an important negative regulator of T-cell function. In this report, we demonstrate that A(2A)R stimulation not only inhibits the generation of adaptive effector T cells but also promotes the induction of adaptive regulatory T cells. In vitro, antigen recognition in the setting of A(2A)R engagement induces T-cell anergy, even in the presence of costimulation. T cells initially stimulated in the presence of an A(2A)R agonist fail to proliferate and produce interleukin-2 and interferon (IFN)-gamma when rechallenged in the absence of A(2A)R stimulation. Likewise, in an in vivo model of autoimmunity, tissue-derived adenosine promotes anergy and abrogates tissue destruction. Indeed, A(2A)R stimulation inhibits interleukin-6 expression while enhancing the production of transforming growth factor-beta. Accordingly, treating mice with A(2A)R agonists not only inhibits Th1 and Th17 effector cell generation but also promotes the generation of Foxp3(+) and LAG-3(+) regulatory T cells. In this regard, A(2A)R agonists fail to prevent autoimmunity by LAG-3(-/-) clonotypic T cells, implicating an important role for LAG-3 in adenosine-mediated peripheral tolerance. Overall, our findings demonstrate that extracellular adenosine stimulates the A(2A)R to promote long-term T-cell anergy and the generation of adaptive regulatory T cells.

Specialty section: This article was submitted to Inflammation, a section of the journal Frontiers in Immunology