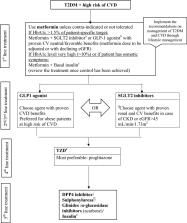 The recent American Diabetes Association and the European Association for the Study of Diabetes guideline mentioned glycaemia management in type 2 diabetes mellitus (T2DM) patients with cardiovascular diseases (CVDs); however, it did not cover the treatment approaches for patients with T2DM having a high risk of CVD, and treatment and screening approaches for CVDs in patients with concomitant T2DM. This consensus guideline undertakes the data obtained from all the cardiovascular outcome trials (CVOTs) to propose approaches for the T2DM management in presence of CV comorbidities. For patients at high risk of CVD, metformin is the drug of choice to manage the T2DM to achieve a patient specific HbA1c target. In case of established CVD, a combination of glucagon-like peptide-1 receptor agonist with proven CV benefits is recommended along with metformin, while for chronic kidney disease or heart failure, a sodium–glucose transporter proteins-2 inhibitor with proven benefit is advised. This document also summarises various screening and investigational approaches for the major CV events with their accuracy and specificity along with the treatment guidance to assist the healthcare professionals in selecting the best management strategies for every individual. Since lifestyle modification and management plays an important role in maintaining the effectiveness of the pharmacological therapies, authors of this consensus recommendation have also briefed on the patient-centric non-pharmacological management of T2DM and CVD.

Effects of Once-Weekly Exenatide on Cardiovascular Outcomes in Type 2 Diabetes.

The effect of irbesartan on the development of diabetic nephropathy in patients with type 2 diabetes.

Ryan Andersen,  P Arner,   … (2001)
Microalbuminuria and hypertension are risk factors for diabetic nephropathy. Blockade of the renin-angiotensin system slows the progression to diabetic nephropathy in patients with type 1 diabetes, but similar data are lacking for hypertensive patients with type 2 diabetes. We evaluated the renoprotective effect of the angiotensin-II-receptor antagonist irbesartan in hypertensive patients with type 2 diabetes and microalbuminuria. A total of 590 hypertensive patients with type 2 diabetes and microalbuminuria were enrolled in this multinational, randomized, double-blind, placebo-controlled study of irbesartan, at a dose of either 150 mg daily or 300 mg daily, and were followed for two years. The primary outcome was the time to the onset of diabetic nephropathy, defined by persistent albuminuria in overnight specimens, with a urinary albumin excretion rate that was greater than 200 microg per minute and at least 30 percent higher than the base-line level. The base-line characteristics in the three groups were similar. Ten of the 194 patients in the 300-mg group (5.2 percent) and 19 of the 195 patients in the 150-mg group (9.7 percent) reached the primary end point, as compared with 30 of the 201 patients in the placebo group (14.9 percent) (hazard ratios, 0.30 [95 percent confidence interval, 0.14 to 0.61; P< 0.001] and 0.61 [95 percent confidence interval, 0.34 to 1.08; P=0.081 for the two irbesartan groups, respectively). The average blood pressure during the course of the study was 144/83 mm Hg in the placebo group, 143/83 mm Hg in the 150-mg group, and 141/83 mm Hg in the 300-mg group (P=0.004 for the comparison of systolic blood pressure between the placebo group and the combined irbesartan groups). Serious adverse events were less frequent among the patients treated with irbesartan (P=0.02). Irbesartan is renoprotective independently of its blood-pressure-lowering effect in patients with type 2 diabetes and microalbuminuria.