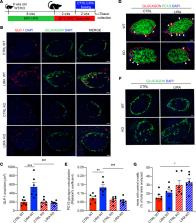 Glucagon-like peptide-1 (GLP-1) is an incretin hormone that potentiates glucose-stimulated insulin secretion. GLP-1 is classically produced by gut L cells; however, under certain circumstances α cells can express the prohormone convertase required for proglucagon processing to GLP-1, prohormone convertase 1/3 (PC1/3), and can produce GLP-1. However, the mechanisms through which this occurs are poorly defined. Understanding the mechanisms by which α cell PC1/3 expression can be activated may reveal new targets for diabetes treatment. Here, we demonstrate that the GLP-1 receptor (GLP-1R) agonist, liraglutide, increased α cell GLP-1 expression in a β cell GLP-1R–dependent manner. We demonstrate that this effect of liraglutide was translationally relevant in human islets through application of a new scRNA-seq technology, DART-Seq. We found that the effect of liraglutide to increase α cell PC1/3 mRNA expression occurred in a subcluster of α cells and was associated with increased expression of other β cell–like genes, which we confirmed by IHC. Finally, we found that the effect of liraglutide to increase bihormonal insulin + glucagon + cells was mediated by the β cell GLP-1R in mice. Together, our data validate a high-sensitivity method for scRNA-seq in human islets and identify a potentially novel GLP-1–mediated pathway regulating human α cell function. 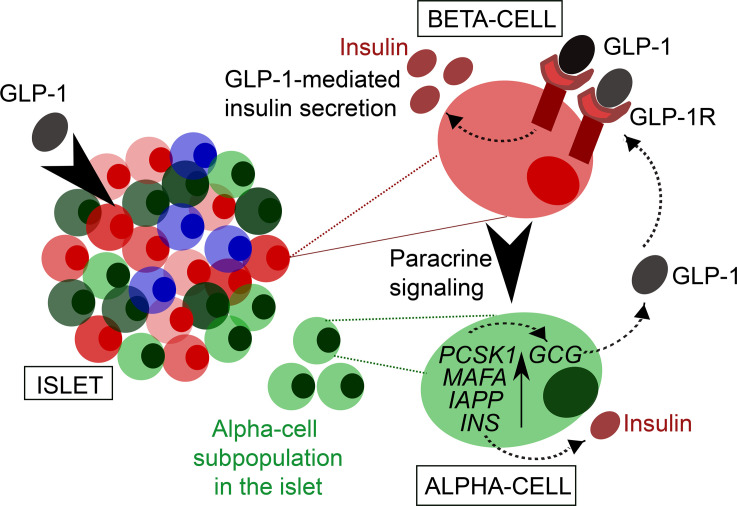 Tim Stuart,  Andrew Butler,  Paul Hoffman … (2019)
Single-cell transcriptomics has transformed our ability to characterize cell states, but deep biological understanding requires more than a taxonomic listing of clusters. As new methods arise to measure distinct cellular modalities, a key analytical challenge is to integrate these datasets to better understand cellular identity and function. Here, we develop a strategy to "anchor" diverse datasets together, enabling us to integrate single-cell measurements not only across scRNA-seq technologies, but also across different modalities. After demonstrating improvement over existing methods for integrating scRNA-seq data, we anchor scRNA-seq experiments with scATAC-seq to explore chromatin differences in closely related interneuron subsets and project protein expression measurements onto a bone marrow atlas to characterize lymphocyte populations. Lastly, we harmonize in situ gene expression and scRNA-seq datasets, allowing transcriptome-wide imputation of spatial gene expression patterns. Our work presents a strategy for the assembly of harmonized references and transfer of information across datasets.

Authorship note: MS and MMH contributed equally to this work.

This work is licensed under the Creative Commons Attribution 4.0 International License. To view a copy of this license, visit http://creativecommons.org/licenses/by/4.0/.

Self URI: This article is available online at https://insight.jci.org/articles/view/141851