The Risks of miRNA Therapeutics: In a Drug Target Perspective 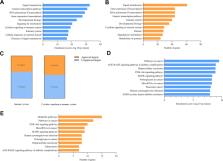 RNAi therapeutics have been growing. Patisiran and givosiran, two siRNA-based drugs, were approved by the Food and Drug Administration in 2018 and 2019, respectively. However, there is rare news on the advance of miRNA drugs (another therapeutic similar to siRNA drug). Here we report the existing obstacles of miRNA therapeutics by analyses for resources available in a drug target perspective, despite being appreciated when it began. Only 10 obtainable miRNA drugs have been in clinical trials with none undergoing phase III, while over 60 siRNA drugs are in complete clinical trial progression including two approvals. We mechanically compared the two types of drug and found that their major distinction lay in the huge discrepancy of the target number of two RNA molecules, which was caused by different complementary ratios. One miRNA generally targets tens and even hundreds of genes. We named it “too many targets for miRNA effect” (TMTME). Further, two adverse events from the discontinuation of two miRNA therapeutics were exactly answered by TMTME. In summary, TMTME is inevitable because of the special complementary approach between miRNA and its target. It means that miRNA therapeutics would trigger a series of unknown and unpreventable consequences, which makes it a considerable alternative for application.

Thomas Hansen,  Trine Jensen,  Bettina H. Clausen … (2013)
MicroRNAs (miRNAs) are important post-transcriptional regulators of gene expression that act by direct base pairing to target sites within untranslated regions of messenger RNAs. Recently, miRNA activity has been shown to be affected by the presence of miRNA sponge transcripts, the so-called competing endogenous RNA in humans and target mimicry in plants. We previously identified a highly expressed circular RNA (circRNA) in human and mouse brain. Here we show that this circRNA acts as a miR-7 sponge; we term this circular transcript ciRS-7 (circular RNA sponge for miR-7). ciRS-7 contains more than 70 selectively conserved miRNA target sites, and it is highly and widely associated with Argonaute (AGO) proteins in a miR-7-dependent manner. Although the circRNA is completely resistant to miRNA-mediated target destabilization, it strongly suppresses miR-7 activity, resulting in increased levels of miR-7 targets. In the mouse brain, we observe overlapping co-expression of ciRS-7 and miR-7, particularly in neocortical and hippocampal neurons, suggesting a high degree of endogenous interaction. We further show that the testis-specific circRNA, sex-determining region Y (Sry), serves as a miR-138 sponge, suggesting that miRNA sponge effects achieved by circRNA formation are a general phenomenon. This study serves as the first, to our knowledge, functional analysis of a naturally expressed circRNA.

MicroRNA therapeutics: towards a new era for the management of cancer and other diseases

Rajesha Rupaimoole,  Frank J Slack (2017)
MicroRNAs (miRNAs) are small non-coding RNAs that can modulate mRNA expression. Insights into the roles of miRNAs in development and disease have led to the development of new therapeutic approaches that are based on miRNA mimics or agents that inhibit their functions (antimiRs), and the first such approaches have entered the clinic. This Review discusses the role of different miRNAs in cancer and other diseases, and provides an overview of current miRNA therapeutics in the clinic.

Zhonghan Li,  Tariq M. Rana (2014)
MicroRNAs (miRNAs) are evolutionarily conserved small non-coding RNAs that have crucial roles in regulating gene expression. Increasing evidence supports a role for miRNAs in many human diseases, including cancer and autoimmune disorders. The function of miRNAs can be efficiently and specifically inhibited by chemically modified antisense oligonucleotides, supporting their potential as targets for the development of novel therapies for several diseases. In this Review we summarize our current knowledge of the design and performance of chemically modified miRNA-targeting antisense oligonucleotides, discuss various in vivo delivery strategies and analyse ongoing challenges to ensure the specificity and efficacy of therapeutic oligonucleotides in vivo. Finally, we review current progress on the clinical development of miRNA-targeting therapeutics.