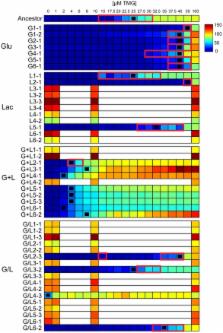 Adaptation to novel environments is often associated with changes in gene regulation. Nevertheless, few studies have been able both to identify the genetic basis of changes in regulation and to demonstrate why these changes are beneficial. To this end, we have focused on understanding both how and why the lactose utilization network has evolved in replicate populations of Escherichia coli. We found that lac operon regulation became strikingly variable, including changes in the mode of environmental response (bimodal, graded, and constitutive), sensitivity to inducer concentration, and maximum expression level. In addition, some classes of regulatory change were enriched in specific selective environments. Sequencing of evolved clones, combined with reconstruction of individual mutations in the ancestral background, identified mutations within the lac operon that recapitulate many of the evolved regulatory changes. These mutations conferred fitness benefits in environments containing lactose, indicating that the regulatory changes are adaptive. The same mutations conferred different fitness effects when present in an evolved clone, indicating that interactions between the lac operon and other evolved mutations also contribute to fitness. Similarly, changes in lac regulation not explained by lac operon mutations also point to important interactions with other evolved mutations. Together these results underline how dynamic regulatory interactions can be, in this case evolving through mutations both within and external to the canonical lactose utilization network.

Differences in gene regulation underlie many important biological processes and are thought to be important for the adaption of organisms to novel environments. Here we focus on the regulation of a group of well-studied genes, the lac operon, that control the utilization of lactose sugar, and we examine how their regulation changes during the adaptation of populations of Escherichia coli bacteria to environments that differ only in the presence of lactose. We find that lac operon regulation is altered in almost all populations that evolve in the presence of lactose and identify two classes of mutations that explain a large part of this change and that confer significant fitness benefits. Interestingly, our study indicates that other mutations, lying outside of the commonly recognized control region, cause new regulation of the lac operon. Together these findings reinforce the importance of changes in gene regulation during evolution and suggest that the biological basis of these changes can be complex and involve novel interactions between genes.

Multistability in the lactose utilization network of Escherichia coli.

Mukund Thattai,  Alexander van Oudenaarden,  Boris Shraiman … (2004)
Multistability, the capacity to achieve multiple internal states in response to a single set of external inputs, is the defining characteristic of a switch. Biological switches are essential for the determination of cell fate in multicellular organisms, the regulation of cell-cycle oscillations during mitosis and the maintenance of epigenetic traits in microbes. The multistability of several natural and synthetic systems has been attributed to positive feedback loops in their regulatory networks. However, feedback alone does not guarantee multistability. The phase diagram of a multistable system, a concise description of internal states as key parameters are varied, reveals the conditions required to produce a functional switch. Here we present the phase diagram of the bistable lactose utilization network of Escherichia coli. We use this phase diagram, coupled with a mathematical model of the network, to quantitatively investigate processes such as sugar uptake and transcriptional regulation in vivo. We then show how the hysteretic response of the wild-type system can be converted to an ultrasensitive graded response. The phase diagram thus serves as a sensitive probe of molecular interactions and as a powerful tool for rational network design.

Optimality and evolutionary tuning of the expression level of a protein.

Uri Alon,  Erez Dekel (2005)
Different proteins have different expression levels. It is unclear to what extent these expression levels are optimized to their environment. Evolutionary theories suggest that protein expression levels maximize fitness, but the fitness as a function of protein level has seldom been directly measured. To address this, we studied the lac system of Escherichia coli, which allows the cell to use the sugar lactose for growth. We experimentally measured the growth burden due to production and maintenance of the Lac proteins (cost), as well as the growth advantage (benefit) conferred by the Lac proteins when lactose is present. The fitness function, given by the difference between the benefit and the cost, predicts that for each lactose environment there exists an optimal Lac expression level that maximizes growth rate. We then performed serial dilution evolution experiments at different lactose concentrations. In a few hundred generations, cells evolved to reach the predicted optimal expression levels. Thus, protein expression from the lac operon seems to be a solution of a cost-benefit optimization problem, and can be rapidly tuned by evolution to function optimally in new environments.

Publisher ID: PGENETICS-D-11-01811
DOI: 10.1371/journal.pgen.1002444
PMC ID: 3257284
PubMed ID: 22253602
Copyright statement: Quan et al. This is an open-access article distributed under the terms of the Creative Commons Attribution License, which permits unrestricted use, distribution, and reproduction in any medium, provided the original author and source are credited.