Computational cardiology and risk stratification for sudden cardiac death: one of the grand challenges for cardiology in the 21st century 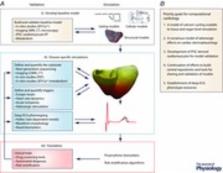 Journal: The Journal of Physiology

Risk stratification in the context of sudden cardiac death has been acknowledged as one of the major challenges facing cardiology for the past four decades. In recent years, the advent of high performance computing has facilitated organ‐level simulation of the heart, meaning we can now examine the causes, mechanisms and impact of cardiac dysfunction in silico. As a result, computational cardiology, largely driven by the Physiome project, now stands at the threshold of clinical utility in regards to risk stratification and treatment of patients at risk of sudden cardiac death. In this white paper, we outline a roadmap of what needs to be done to make this translational step, using the relatively well‐developed case of acquired or drug‐induced long QT syndrome as an exemplar case.

Xonia Carvajal-Vergara, Ana Sevilla, Sunita L. D’Souza … (2010)
Generation of reprogrammed induced pluripotent stem cells (iPSC) from patients with defined genetic disorders promises important avenues to understand the etiologies of complex diseases, and the development of novel therapeutic interventions. We have generated iPSC from patients with LEOPARD syndrome (LS; acronym of its main features: Lentigines, Electrocardiographic abnormalities, Ocular hypertelorism, Pulmonary valve stenosis, Abnormal genitalia, Retardation of growth and Deafness), an autosomal dominant developmental disorder belonging to a relatively prevalent class of inherited RAS-MAPK signaling diseases, which also includes Noonan syndrome (NS), with pleiomorphic effects on several tissues and organ systems1,2. The patient-derived cells have a mutation in the PTPN11 gene, which encodes the SHP2 phosphatase. The iPSC have been extensively characterized and produce multiple differentiated cell lineages. A major disease phenotype in patients with LEOPARD syndrome is hypertrophic cardiomyopathy. We show that in vitro-derived cardiomyocytes from LS-iPSC are larger, have a higher degree of sarcomeric organization and preferential localization of NFATc4 in the nucleus when compared to cardiomyocytes derived from human embryonic stem cells (HESC) or wild type (wt) iPSC derived from a healthy brother of one of the LS patients. These features correlate with a potential hypertrophic state. We also provide molecular insights into signaling pathways that may promote the disease phenotype.

Dan Roden, Prince J. Kannankeril, Dawood Darbar (2010)
The drug-induced long QT syndrome is a distinct clinical entity that has evolved from an electrophysiologic curiosity to a centerpiece in drug regulation and development. This evolution reflects an increasing recognition that a rare adverse drug effect can profoundly upset the balance between benefit and risk that goes into the prescription of a drug by an individual practitioner as well as the approval of a new drug entity by a regulatory agency. This review will outline how defining the central mechanism, block of the cardiac delayed-rectifier potassium current I(Kr), has contributed to defining risk in patients and in populations. Models for studying risk, and understanding the way in which clinical risk factors modulate cardiac repolarization at the molecular level are discussed. Finally, the role of genetic variants in modulating risk is described.