Navigating the Chemical Space of Multitarget-Directed Ligands: From Hybrids to Fragments in Alzheimer’s Disease 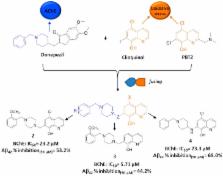 Multitarget drug discovery is one of the hottest topics and most active fields in the search for new molecules against Alzheimer’s disease (AD). Over the last 20 years, many promising multitarget-directed ligands (MTDLs) have been identified and developed at a pre-clinical level. However, how to design them in a rational way remains the most fundamental challenge of medicinal chemists. This is related to the foundational question of achieving an optimized activity towards multiple targets of interest, while preserving drug-like properties. In this respect, large hybrid molecules and small fragments are poles apart. In this review article, our aim is to appraise what we have accomplished in the development of both hybrid- and fragment-like molecules directed to diverse AD targets ( i.e., acetylcholinesterase, NMDA receptors, metal chelation, BACE-1 and GSK-3β). In addition, we attempt to highlight what are the persistent needs that deserve to be improved and cared for, with the ultimate goal of moving an MTDL to AD clinical studies.

Albert Barabasi,  Natali Gulbahce,  Joseph Loscalzo (2011)
Given the functional interdependencies between the molecular components in a human cell, a disease is rarely a consequence of an abnormality in a single gene, but reflects the perturbations of the complex intracellular and intercellular network that links tissue and organ systems. The emerging tools of network medicine offer a platform to explore systematically not only the molecular complexity of a particular disease, leading to the identification of disease modules and pathways, but also the molecular relationships among apparently distinct (patho)phenotypes. Advances in this direction are essential for identifying new disease genes, for uncovering the biological significance of disease-associated mutations identified by genome-wide association studies and full-genome sequencing, and for identifying drug targets and biomarkers for complex diseases.

Network pharmacology: the next paradigm in drug discovery.

Donald L. Hopkins (2008)
The dominant paradigm in drug discovery is the concept of designing maximally selective ligands to act on individual drug targets. However, many effective drugs act via modulation of multiple proteins rather than single targets. Advances in systems biology are revealing a phenotypic robustness and a network structure that strongly suggests that exquisitely selective compounds, compared with multitarget drugs, may exhibit lower than desired clinical efficacy. This new appreciation of the role of polypharmacology has significant implications for tackling the two major sources of attrition in drug development--efficacy and toxicity. Integrating network biology and polypharmacology holds the promise of expanding the current opportunity space for druggable targets. However, the rational design of polypharmacology faces considerable challenges in the need for new methods to validate target combinations and optimize multiple structure-activity relationships while maintaining drug-like properties. Advances in these areas are creating the foundation of the next paradigm in drug discovery: network pharmacology.

Jeffrey L Cummings,  Travis Morstorf,  Kate Zhong (2014)
Introduction Alzheimer’s disease (AD) is increasing in frequency as the global population ages. Five drugs are approved for treatment of AD, including four cholinesterase inhibitors and an N-methyl-D-aspartate (NMDA)-receptor antagonist. We have an urgent need to find new therapies for AD. Methods We examined Clinicaltrials.gov, a public website that records ongoing clinical trials. We examined the decade of 2002 to 2012, to better understand AD-drug development. We reviewed trials by sponsor, sites, drug mechanism of action, duration, number of patients required, and rate of success in terms of advancement from one phase to the next. We also reviewed the current AD therapy pipeline. Results During the 2002 to 2012 observation period, 413 AD trials were performed: 124 Phase 1 trials, 206 Phase 2 trials, and 83 Phase 3 trials. Seventy-eight percent were sponsored by pharmaceutical companies. The United States of America (U.S.) remains the single world region with the greatest number of trials; cumulatively, more non-U.S. than U.S. trials are performed. The largest number of registered trials addressed symptomatic agents aimed at improving cognition (36.6%), followed by trials of disease-modifying small molecules (35.1%) and trials of disease-modifying immunotherapies (18%). The mean length of trials increases from Phase 2 to Phase 3, and the number of participants in trials increases between Phase 2 and Phase 3. Trials of disease-modifying agents are larger and longer than those for symptomatic agents. A very high attrition rate was found, with an overall success rate during the 2002 to 2012 period of 0.4% (99.6% failure). Conclusions The Clinicaltrials.gov database demonstrates that relatively few clinical trials are undertaken for AD therapeutics, considering the magnitude of the problem. The success rate for advancing from one phase to another is low, and the number of compounds progressing to regulatory review is among the lowest found in any therapeutic area. The AD drug-development ecosystem requires support.

Licensee MDPI, Basel, Switzerland. This article is an open access article distributed under the terms and conditions of the Creative Commons by Attribution (CC-BY) license ( http://creativecommons.org/licenses/by/4.0/).