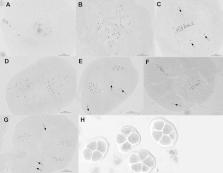 Wild cotton species are an important source of desirable genes for genetic improvement of cultivated cotton Gossypium hirsutum Linnaeus, 1763. For the success of such an improvement, chromosome pairings and recombinations in hybrids are fundamental. The wild African species G. longicalyx Hutchinson & Lee, 1958 could be used as donor of the desirable trait of fiber fineness. Twelve BC1 plants obtained from the backcrossing of [( G. hirsutum × G. thurberi Todaro, 1877) 2 × G. longicalyx ] (A hD hD 1F 1, 2n = 4x = 52) trispecies hybrid (HTL) by G. hirsutum (cv. C2) (A hA hD hD h, 2n = 4x = 52) were investigated for meiotic behaviour and plant fertility. Their chromosome associations varied as follows: (2.5 to 11.5) I + (17 to 22) II + (0.31 to 1.93) III + (0.09 to 1.93) IV + (0 to 0.07) V + (0 to 0.14) VI. Their pollen fertility ranged from 4.67 to 32.10 %. Only four BC1 plants produced a few seeds through self-pollination. The remaining BC1 were totally self-sterile and usually presented the highest number of univalents. All BC1 materials produced BC2 seeds (0.44 to 6.50 seeds per backcross) with the number of seeds negatively correlated with the number of univalents (R 2 = 0.45, P < 0.05). Most BC1 plants gave significantly finer fiber compared to the cultivated G. hirsutum . SSR markers showed a segregation of wild alleles among the backcross derivatives and Genomic in situ hybridization (GISH) revealed presence of entire chromosomes of G. longicalyx as well as recombinant chromosomes in the backcross derivatives. The significance and details of these results are presented and the prospects of successfully exploiting these plant materials are discussed.

Michelle Nguyen, B Burr, B. Courtois … (2003)
An interspecific Gossypium hirsutum x Gossypium barbadense backcross population of 75 BC1 plants was evaluated for 1014 markers. The map consists of 888 loci, including 465 AFLPs, 229 SSRs, 192 RFLPs, and 2 morphological markers, ordered in 37 linkage groups that represent most if not all of the 26 chromosomes, altogether spanning 4400 cM. Loci were not evenly distributed over linkage groups, and 18 of the 26 long groups had a single dense region. This paper proposes a partially revised list of the 13 pairs of homoeologous A/D chromosomes of the 2n = 4x = 52 tetraploid cotton genome. The major revisions, which involve the c3-c17, c4-c22, c5-D08, and c10-c20 homoeologous pairs, are based on the mapping of 68 SSR and RFLP loci with a known chromosome assignment, as well as on comparative alignments with previously published G. hirsutum x G. barbadense maps. The overall congruency in the locus orders and distances of common SSR and RFLP loci in these maps allows for an estimation of the consensus length that reaches a minimum of 5500 cM, and is encouraging for future efforts aimed at developing an integrated map of cultivated cotton. The present map also provides a firm framework for precision mapping of Mendelian components of quantitative traits in cotton

Richard C Cronn, Randall L. Small, Tamara Haselkorn … (2002)
Previous molecular phylogenetic studies have failed to resolve the branching order among the major cotton (Gossypium) lineages, and it has been unclear whether this reflects actual history (rapid radiation) or sampling properties of the genes evaluated. In this paper, we reconsider the phylogenetic relationships of diploid cotton genome groups using DNA sequences from 11 single-copy nuclear loci (10 293 base pairs [bp]), nuclear ribosomal DNA (695 bp), and four chloroplast loci (7370 bp). Results from individual loci and combined nuclear and chloroplast DNA partitions reveal that the cotton genome groups radiated in rapid succession following the formation of the genus. Maximum likelihood analysis of nuclear synonymous sites shows that this radiation occurred within a time span equivalent to 17% of the time since the separation of Gossypium from its nearest extant relatives in the genera Kokia and Gossypioides. Chloroplast and nuclear phylogenies differ significantly with respect to resolution of the basal divergence in the genus and to interrelationships among African cottons. This incongruence is due to limited character evolution in cpDNA and either previously unsuspected hybridization or unreliable phylogenetic performance of the cpDNA characters. This study highlights the necessity of using multiple, independent data sets for resolving phylogenetic relationships of rapidly diverged lineages.

The Consequences of Chromosome Segregation Errors in Mitosis and Meiosis

Tamara Potapova, Gary Gorbsky (2017)
Mistakes during cell division frequently generate changes in chromosome content, producing aneuploid or polyploid progeny cells. Polyploid cells may then undergo abnormal division to generate aneuploid cells. Chromosome segregation errors may also involve fragments of whole chromosomes. A major consequence of segregation defects is change in the relative dosage of products from genes located on the missegregated chromosomes. Abnormal expression of transcriptional regulators can also impact genes on the properly segregated chromosomes. The consequences of these perturbations in gene expression depend on the specific chromosomes affected and on the interplay of the aneuploid phenotype with the environment. Most often, these novel chromosome distributions are detrimental to the health and survival of the organism. However, in a changed environment, alterations in gene copy number may generate a more highly adapted phenotype. Chromosome segregation errors also have important implications in human health. They may promote drug resistance in pathogenic microorganisms. In cancer cells, they are a source for genetic and phenotypic variability that may select for populations with increased malignance and resistance to therapy. Lastly, chromosome segregation errors during gamete formation in meiosis are a primary cause of human birth defects and infertility. This review describes the consequences of mitotic and meiotic errors focusing on novel concepts and human health.