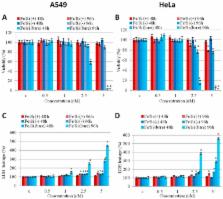 Increasing biomedical applications of iron oxide nanoparticles (IONPs) in academic and commercial settings have alarmed the scientific community about the safety and assessment of toxicity profiles of IONPs. The great amount of diversity found in the cytotoxic measurements of IONPs points toward the necessity of careful characterization and quantification of IONPs. The present document discusses the major developments related to in vitro and in vivo toxicity assessment of IONPs and its relationship with the physicochemical parameters of IONPs. Major discussion is included on the current spectrophotometric and imaging based techniques used for quantifying, and studying the clearance and biodistribution of IONPs. Several invasive and non-invasive quantification techniques along with the pitfalls are discussed in detail. Finally, critical guidelines are provided to optimize the design of IONPs to minimize the toxicity.

Bernhard Gleich,  Jürgen Weizenecker (2005)
The use of contrast agents and tracers in medical imaging has a long history. They provide important information for diagnosis and therapy, but for some desired applications, a higher resolution is required than can be obtained using the currently available medical imaging techniques. Consider, for example, the use of magnetic tracers in magnetic resonance imaging: detection thresholds for in vitro and in vivo imaging are such that the background signal from the host tissue is a crucial limiting factor. A sensitive method for detecting the magnetic particles directly is to measure their magnetic fields using relaxometry; but this approach has the drawback that the inverse problem (associated with transforming the data into a spatial image) is ill posed and therefore yields low spatial resolution. Here we present a method for obtaining a high-resolution image of such tracers that takes advantage of the nonlinear magnetization curve of small magnetic particles. Initial 'phantom' experiments are reported that demonstrate the feasibility of the imaging method. The resolution that we achieve is already well below 1 mm. We evaluate the prospects for further improvement, and show that the method has the potential to be developed into an imaging method characterized by both high spatial resolution as well as high sensitivity.

Neenu Singh,  Bella B. Manshian,  gareth jenkins … (2009)
With the rapid expansion in the nanotechnology industry, it is essential that the safety of engineered nanomaterials and the factors that influence their associated hazards are understood. A vital area governing regulatory health risk assessment is genotoxicology (the study of genetic aberrations following exposure to test agents), as DNA damage may initiate and promote carcinogenesis, or impact fertility. Of late, considerable attention has been given to the toxicity of engineered nanomaterials, but the importance of their genotoxic potential on human health has been largely overlooked. This comprehensive review focuses on the reported abilities of metal nanoparticles, metal-oxide nanoparticles, quantum dots, fullerenes, and fibrous nanomaterials, to damage or interact with DNA, and their ecogenotoxicity is also considered. Many of the engineered nanomaterials assessed were found to cause genotoxic responses, such as chromosomal fragmentation, DNA strand breakages, point mutations, oxidative DNA adducts and alterations in gene expression profiles. However, there are clear inconsistencies in the literature and it is difficult to draw conclusions on the physico-chemical features of nanomaterials that promote genotoxicity, largely due to study design. Hence, areas that require that further attention are highlighted and recommendations to improve our understanding of the genotoxic potential of engineered nanomaterials are addressed.

C Compton,  Helen J Lewis,  R Weissleder … (1988)
The pharmacokinetics (distribution, metabolism, bioavailability, excretion) and toxicity (acute and subacute toxicity, mutagenicity) of a superparamagnetic iron oxide preparation (AMI-25), currently used in clinical trials, were evaluated by 59Fe radiotracer studies, measurements of relaxation times, the ability to reverse iron deficiency anemia, histologic examination, and laboratory parameters. One hour after administration of AMI-25 to rats (18 mumol Fe/kg; 1 mg Fe/kg), 82.6 +/- 0.3% of the administered dose was sequestered in the liver and 6.2 +/- 7.6% in the spleen. Peak concentrations of 59Fe were found in liver after 2 hr and in the spleen after 4 hr. 59Fe slowly cleared from liver (half-life, 3 days) and spleen (half-life, 4 days) and was incorporated into hemoglobin of erythrocytes in a time-dependent fashion. The half-time of the T2 effect on liver and spleen (24-48 hr) was shorter than the 59Fe clearance, indicating metabolism of AMI-25 into other forms of iron. IV administration of AMI-25 (30 mg Fe/kg) corrected iron-deficiency anemia and showed bioavailability similar to that of commercially available IV iron preparations within 7 days. No acute or subacute toxic effects were detected by histologic or serologic studies in rats or beagle dogs who received a total of 3000 mumol Fe/kg, 150 times the dose proposed for MR imaging of the liver. Our results indicate that AMI-25 is a fully biocompatible potential contrast agent for MR.