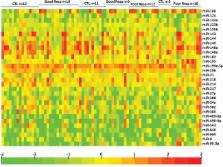 A major challenge in osteosarcoma (OS) is the selection of the most effective chemotherapeutic agents for individual patients, while the administration of ineffective chemotherapy increases mortality and decreases quality of life in patients. This emphasizes the need to evaluate every patient's probability of responding to each chemotherapeutic agent. We developed a profiling strategy for serum exosomal microRNAs and mRNAs in OS patients with differential chemotherapeutic responses. Twelve miRNAs were up regulated and 18 miRNAs were under regulated significantly in OS patient with poor chemotherapeutic response when compared with those in good chemotherapeutic response (p<0.05). In addition, miR-124, miR133a, miR-199a-3p, and miR-385 were validated and significantly reduced in poorly responded patients with an independent OS cohort. While miR-135b, miR-148a, miR-27a, and miR-9 were significantly over expressed in serum exosomes. Bioinformatic analysis by DIANA-mirPath demonstrated that Proteoglycans in cancer, Hippo signaling pathway, Pathways in cancer, Transcriptional misregulation in cancer, PI3K-Akt signaling pathway, Ras signaling pathway, Ubiquitin mediated proteolysis, Choline metabolism in cancer were the most prominent pathways enriched in quantiles with the miRNA patterns related to poor chemotherapeutic response. Messenger RNAs(mRNAs) includingAnnexin2, Smad2, Methylthioadenosine phosphorylase (MTAP), Cdc42-interacting protein 4 (CIP4), Pigment Epithelium-Derived Factor (PEDF), WW domain-containing oxidoreductase (WWOX), Cell division cycle 5-like (Cdc5L), P27 were differentially expressed in exosomes in OS patients with different chemotherapeutic response. These data demonstrated that exosomal RNA molecules are reliable biomarkers in classifying osteosarcoma with different chemotherapy sensitivity.

Exosome-mediated transfer of mRNAs and microRNAs is a novel mechanism of genetic exchange between cells.

Margareta Sjöstrand,  Brian J. Lee,  J. Lötvall … (2007)
Exosomes are vesicles of endocytic origin released by many cells. These vesicles can mediate communication between cells, facilitating processes such as antigen presentation. Here, we show that exosomes from a mouse and a human mast cell line (MC/9 and HMC-1, respectively), as well as primary bone marrow-derived mouse mast cells, contain RNA. Microarray assessments revealed the presence of mRNA from approximately 1300 genes, many of which are not present in the cytoplasm of the donor cell. In vitro translation proved that the exosome mRNAs were functional. Quality control RNA analysis of total RNA derived from exosomes also revealed presence of small RNAs, including microRNAs. The RNA from mast cell exosomes is transferable to other mouse and human mast cells. After transfer of mouse exosomal RNA to human mast cells, new mouse proteins were found in the recipient cells, indicating that transferred exosomal mRNA can be translated after entering another cell. In summary, we show that exosomes contain both mRNA and microRNA, which can be delivered to another cell, and can be functional in this new location. We propose that this RNA is called "exosomal shuttle RNA" (esRNA).

The epidemiology of osteosarcoma.

Giulia Ottaviani,  Norman Jaffe (2008)
Osteosarcoma derives from primitive bone-forming mesenchymal cells and is the most common primary bone malignancy. The incidence rates and 95% confidence intervals of osteosarcoma for all races and both sexes are 4.0 (3.5-4.6) for the range 0-14 years and 5.0 (4.6-5.6) for the range 0-19 years per year per million persons. Among childhood cancers, osteosarcoma occurs eighth in general incidence and in the following order: leukemia (30%), brain and other nervous system cancers (22.3%), neuroblastoma (7.3%), Wilms tumor (5.6%), Non-Hodgkin lymphoma (4.5%), rhabdomyosarcoma (3.1%), retinoblastoma (2.8%), osteosarcoma (2.4%), and Ewing sarcoma (1.4%). The incidence rates of childhood and adolescent osteosarcoma with 95% confidence intervals areas follows: Blacks, 6.8/year/million; Hispanics, 6.5/year/million; and Caucasians, 4.6/year/million. Osteosarcoma has a bimodal age distribution, having the first peak during adolescence and the second peak in older adulthood. The first peak is in the 10-14-year-old age group, coinciding with the pubertal growth spurt. This suggests a close relationship between the adolescent growth spurt and osteosarcoma. The second osteosarcoma peak is in adults older than 65 years of age; it is more likely to represent a second malignancy, frequently related to Paget's disease. The incidence of osteosarcoma has always been considered to be higher in males than in females, occurring at a rate of 5.4 per million persons per year in males vs. 4.0 per million in females, with a higher incidence in blacks (6.8 per million persons per year) and Hispanics (6.5 per million), than in whites (4.6 per million). Osteosarcoma commonly occurs in the long bones of the extremities near the metaphyseal growth plates. The most common sites are the femur (42%, with 75% of tumors in the distal femur), the tibia (19%, with 80% of tumors in the proximal tibia), and the humerus (10%, with 90% of tumors in the proximal humerus). Other likely locations are the skull or jaw (8%) and the pelvis (8%). Cancer deaths due to bone and joint malignant neoplasms represent 8.9% of all childhood and adolescent cancer deaths. Death rates for osteosarcoma have been declining by about 1.3% per year. The overall 5-year survival rate for osteosarcoma is 68%, without significant gender difference. The age of the patient is correlated with the survival, with the poorest survival among older patients. Complete surgical excision is important to ensure an optimum outcome. Tumor staging, presence of metastases, local recurrence, chemotherapy regimen, anatomic location, size of the tumor, and percentage of tumor cells destroyed after neoadjuvant chemotherapy have effects on the outcome.