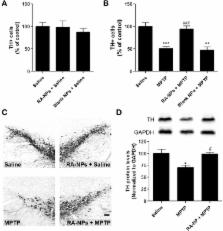 Retinoic acid (RA) plays an important role in the commitment, maturation and survival of neural cells. Recently, RA was pointed as a therapeutic option for some neurodegenerative diseases, including Parkinson's disease (PD). The administration of RA has been defying, and in this sense we have previously developed novel RA-loaded polymeric nanoparticles (RA-NPs) that ensure the efficient intracellular transport and controlled release of RA. Herein, we show that nanoformulation as an efficient neuroprotective effect on dopaminergic (DA) neurons in the 1-methyl-4-phenyl-1, 2, 3, 6-tetrahydropyridine (MPTP) induced mouse model for PD. The results showed that the RA-NPs administration induced a significant reduction of DA neuron loss in the substantia nigra (SN) as well as their neuronal fiber/axonal innervations in the striatum. Furthermore, we observed an increase in the expression levels of the transcription factors Pitx3 and Nurr1 induced by RA-NPs, showing its supportive effect on the development and functional maintenance of DA neurons in PD. This is the first study showing that RA-NPs can be an innovative strategy to halt the progression of PD pathogenesis, suggesting that this nanoformulation could be of particular interest for the development of new approaches for PD therapeutics.

Sensors and regulators of intracellular pH.

John Orlowski,  Janet Casey,  Sergio Grinstein (2009)
Protons dictate the charge and structure of macromolecules and are used as energy currency by eukaryotic cells. The unique function of individual organelles therefore depends on the establishment and stringent maintenance of a distinct pH. This, in turn, requires a means to sense the prevailing pH and to respond to deviations from the norm with effective mechanisms to transport, produce or consume proton equivalents. A dynamic, finely tuned balance between proton-extruding and proton-importing processes underlies pH homeostasis not only in the cytosol, but in other cellular compartments as well.

Nuclear retinoid receptors and the transcription of retinoid-target genes.

Cécile Rochette-Egly,  Julie Bastien (2004)
The pleiotropic effects of retinoids are mediated by nuclear retinoid receptors (RARs and RXRs) which are ligand-activated transcription factors. In response to retinoid binding, RAR/RXR heterodimers undergo major conformational changes and orchestrate the transcription of specific gene networks, through binding to specific DNA response elements and recruiting cofactor complexes that act to modify local chromatin structure and/or engage the basal transcription machinery. Then the degradation of RARs and RXRs by the ubiquitin-proteasome controls the magnitude and the duration of the retinoid response. RARs and RXRs also integrate a variety of signaling pathways through phosphorylation events which cooperate with the ligand for the control of retinoid-target genes transcription. These different modes of regulation reveal unexpected levels of complexity in the dynamics of retinoid-dependent transcription.

The acute and chronic toxic effects of vitamin A.

Kristina L Penniston,  Sherry A Tanumihardjo (2006)
The acute and chronic effects of vitamin A toxicity are well documented in the literature. Emerging evidence suggests that subtoxicity without clinical signs of toxicity may be a growing concern, because intake from preformed sources of vitamin A often exceeds the recommended dietary allowances (RDA) for adults, especially in developed countries. Osteoporosis and hip fracture are associated with preformed vitamin A intakes that are only twice the current RDA. Assessing vitamin A status in persons with subtoxicity or toxicity is complicated because serum retinol concentrations are nonsensitive indicators in this range of liver vitamin A reserves. The metabolism in well-nourished persons of preformed vitamin A, provided by either liver or supplements, has been studied by several research groups. To control vitamin A deficiency, large therapeutic doses are administered in developing countries to women and children, who often are undernourished. Nevertheless, little attention has been given to the short-term kinetics (ie, after absorption but before storage) of a large dose of vitamin A or to the short- and long-term effects of such a dose given to lactating women on serum and breast-milk concentrations of retinol and its metabolites. Moreover, appropriate dosing regimens have not been systematically evaluated to ascertain the quantitative improvement in vitamin A status of the women and children who receive these supplements. The known acute and chronic effects of vitamin A toxicity have been reported previously. However, further research is needed to ascertain the areas of the world in which subclinical toxicity exists and to evaluate its effects on overall health and well-being.