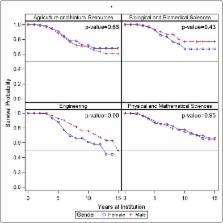 The current climate on college campuses has brought new urgency to the need to increase faculty diversity. In STEM fields particularly, the dearth of underrepresented minority (URM) and female faculty is severe. The retention and success of African American, Hispanic/Latino, American Indian and female faculty have direct implications for the quality and diversity of the future scientific workforce. Understanding the ways retention patterns differ by discipline and institution is crucial for developing a diverse faculty. This study investigates tenure attainment, retention, and time to promotion to full professor for women and URM faculty. We analyze personnel records for assistant and associate professors hired or appointed from 1992 to 2015 at four large land grant institutions. Representation of women and URM faculty in STEM disciplines increased substantially from 1992 to 2015, but mostly for women and Hispanic faculty and more slowly for black and American Indian faculty.

S Ceci,  W M Williams (2011)
Explanations for women's underrepresentation in math-intensive fields of science often focus on sex discrimination in grant and manuscript reviewing, interviewing, and hiring. Claims that women scientists suffer discrimination in these arenas rest on a set of studies undergirding policies and programs aimed at remediation. More recent and robust empiricism, however, fails to support assertions of discrimination in these domains. To better understand women's underrepresentation in math-intensive fields and its causes, we reprise claims of discrimination and their evidentiary bases. Based on a review of the past 20 y of data, we suggest that some of these claims are no longer valid and, if uncritically accepted as current causes of women's lack of progress, can delay or prevent understanding of contemporary determinants of women's underrepresentation. We conclude that differential gendered outcomes in the real world result from differences in resources attributable to choices, whether free or constrained, and that such choices could be influenced and better informed through education if resources were so directed. Thus, the ongoing focus on sex discrimination in reviewing, interviewing, and hiring represents costly, misplaced effort: Society is engaged in the present in solving problems of the past, rather than in addressing meaningful limitations deterring women's participation in science, technology, engineering, and mathematics careers today. Addressing today's causes of underrepresentation requires focusing on education and policy changes that will make institutions responsive to differing biological realities of the sexes. Finally, we suggest potential avenues of intervention to increase gender fairness that accord with current, as opposed to historical, findings.

Survival analysis of faculty retention in science and engineering by gender.

C Geisler,  D. Kaminski (2012)
Individual assistant professors (a total of 2966 faculty) hired in science and engineering since 1990 at 14 United States universities were tracked from time of hire to time of departure by using publicly available catalogs and bulletins. Results of survival analysis showed that the chance that any given faculty member will be retained over time is less than 50%; the median time to departure is 10.9 years. Of all those who enter as assistant professors, 64.2% were promoted to associate professor at the same institution. Overall, men and women are retained and promoted at the same rate. In mathematics, however, faculty leave significantly earlier than other disciplines, and women leave significantly sooner than men, 4.45 years compared with 7.33 years.

Data Availability The data used for this study are institutional personnel records. NC State users sign a confidentiality agreement and the North Carolina State University Institutional Review Board for the Protection of Human Subjects in Research (IRB) agreement (protocol #4055) states that the data are "not to be copied to any other computer or data storage device". Inquiries may be addressed to Nancy Floyd, Director of Institutional Analytics, at ndfloyd@ 123456ncsu.edu or to the NC State IRB Coordinator at irb-coordinator@ 123456ncsu.edu .
Data availability:
ScienceOpen disciplines: Uncategorized