RELION: Implementation of a Bayesian approach to cryo-EM structure determination 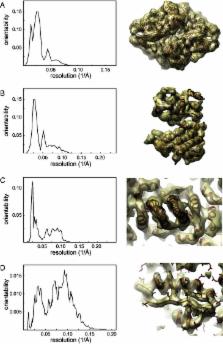 RELION, for REgularized LIkelihood OptimizatioN, is an open-source computer program for the refinement of macromolecular structures by single-particle analysis of electron cryo-microscopy (cryo-EM) data. Whereas alternative approaches often rely on user expertise for the tuning of parameters, RELION uses a Bayesian approach to infer parameters of a statistical model from the data. This paper describes developments that reduce the computational costs of the underlying maximum a posteriori (MAP) algorithm, as well as statistical considerations that yield new insights into the accuracy with which the relative orientations of individual particles may be determined. A so-called gold-standard Fourier shell correlation (FSC) procedure to prevent overfitting is also described. The resulting implementation yields high-quality reconstructions and reliable resolution estimates with minimal user intervention and at acceptable computational costs.

Enoch Baldwin,  Kay D. Mann,  Stanford L Peng … (2006)
EMAN is a scientific image processing package with a particular focus on single particle reconstruction from transmission electron microscopy (TEM) images. It was first released in 1999, and new versions have been released typically 2-3 times each year since that time. EMAN2 has been under development for the last two years, with a completely refactored image processing library, and a wide range of features to make it much more flexible and extensible than EMAN1. The user-level programs are better documented, more straightforward to use, and written in the Python scripting language, so advanced users can modify the programs' behavior without any recompilation. A completely rewritten 3D transformation class simplifies translation between Euler angle standards and symmetry conventions. The core C++ library has over 500 functions for image processing and associated tasks, and it is modular with introspection capabilities, so programmers can add new algorithms with minimal effort and programs can incorporate new capabilities automatically. Finally, a flexible new parallelism system has been designed to address the shortcomings in the rigid system in EMAN1.

Richard Henderson,  Peter Rosenthal (2003)
A computational procedure is described for assigning the absolute hand of the structure of a protein or assembly determined by single-particle electron microscopy. The procedure requires a pair of micrographs of the same particle field recorded at two tilt angles of a single tilt-axis specimen holder together with the three-dimensional map whose hand is being determined. For orientations determined from particles on one micrograph using the map, the agreement (average phase residual) between particle images on the second micrograph and map projections is determined for all possible choices of tilt angle and axis. Whether the agreement is better at the known tilt angle and axis of the microscope or its inverse indicates whether the map is of correct or incorrect hand. An increased discrimination of correct from incorrect hand (free hand difference), as well as accurate identification of the known values for the tilt angle and axis, can be used as targets for rapidly optimizing the search or refinement procedures used to determine particle orientations. Optimized refinement reduces the tendency for the model to match noise in a single image, thus improving the accuracy of the orientation determination and therefore the quality of the resulting map. The hand determination and refinement optimization procedure is applied to image pairs of the dihydrolipoyl acetyltransferase (E2) catalytic core of the pyruvate dehydrogenase complex from Bacillus stearothermophilus taken by low-dose electron cryomicroscopy. Structure factor amplitudes of a three-dimensional map of the E2 catalytic core obtained by averaging untilted images of 3667 icosahedral particles are compared to a scattering reference using a Guinier plot. A noise-dependent structure factor weight is derived and used in conjunction with a temperature factor (B=-1000A(2)) to restore high-resolution contrast without amplifying noise and to visualize molecular features to 8.7A resolution, according to a new objective criterion for resolution assessment proposed here.