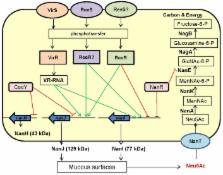 C Traving,  R. Schauer (1998)
Abstract. Sialic acids represent a family of sugar molecules with an unusual and highly variable chemical structure that are found mostly in the terminal position of oligosaccharide chains on the surface of cells and molecules. These special features enable them to fulfil several important and even diametrical biological functions. Because of the great importance of sialic acids, it is also worth having a look at their metabolism in order to get an idea of the intimate connection between structure and function of these fascinating molecules and the often serious consequences that result from disturbances in the balance of metabolic reactions. The latter can be due to genetic disorders that result in the absence of certain enzyme activity, leading to severe illness or even to death.