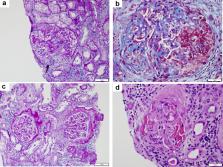 Rashmi Kanagal-Shamanna,  Zijun Xu-Monette,  Roberto Miranda … (2016)
Crystal-storing histiocytosis (CSH) is a rare lesion composed of histiocytes with abnormal intralysosomal accumulation of immunoglobulin (Ig) as crystals, reported in patients with plasmacytic/lymphoplasmacytic neoplasms. The aims of this study were to report the clinicopathological features of 13 patients with CSH, and to describe the proteomic composition of the crystals in three cases analysed by mass spectrometry (MS).