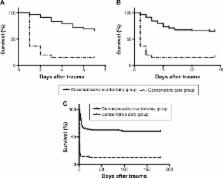 The outcome of decompressive craniectomy (DC) for severe traumatic brain injury (sTBI) patients with fixed dilated pupils (FDPs) is not clear. The objective of this study was to validate the outcome of DC in sTBI patients with FDPs.

Outcomes that were used as indicators in this study were mortality and favorable outcome. The analysis was based on the Glasgow Outcome Scale recorded at 6 months after trauma.

We found that DC plays a therapeutic role in sTBI patients with FDPs, and it is particularly important to reduce intracranial pressure as soon as possible after trauma. For the patients undergoing DC, favorable outcome and low mortality could be achieved.

D James Cooper,  Jeffrey Rosenfeld,  Lynnette Murray … (2011)
It is unclear whether decompressive craniectomy improves the functional outcome in patients with severe traumatic brain injury and refractory raised intracranial pressure. From December 2002 through April 2010, we randomly assigned 155 adults with severe diffuse traumatic brain injury and intracranial hypertension that was refractory to first-tier therapies to undergo either bifrontotemporoparietal decompressive craniectomy or standard care. The original primary outcome was an unfavorable outcome (a composite of death, vegetative state, or severe disability), as evaluated on the Extended Glasgow Outcome Scale 6 months after the injury. The final primary outcome was the score on the Extended Glasgow Outcome Scale at 6 months. Patients in the craniectomy group, as compared with those in the standard-care group, had less time with intracranial pressures above the treatment threshold (P<0.001), fewer interventions for increased intracranial pressure (P<0.02 for all comparisons), and fewer days in the intensive care unit (ICU) (P<0.001). However, patients undergoing craniectomy had worse scores on the Extended Glasgow Outcome Scale than those receiving standard care (odds ratio for a worse score in the craniectomy group, 1.84; 95% confidence interval [CI], 1.05 to 3.24; P=0.03) and a greater risk of an unfavorable outcome (odds ratio, 2.21; 95% CI, 1.14 to 4.26; P=0.02). Rates of death at 6 months were similar in the craniectomy group (19%) and the standard-care group (18%). In adults with severe diffuse traumatic brain injury and refractory intracranial hypertension, early bifrontotemporoparietal decompressive craniectomy decreased intracranial pressure and the length of stay in the ICU but was associated with more unfavorable outcomes. (Funded by the National Health and Medical Research Council of Australia and others; DECRA Australian Clinical Trials Registry number, ACTRN012605000009617.).

E. Ahn,  Thomas M. Scalea,  Leonard M. Eisenberg … (2006)
The aim of this study was to assess outcome following decompressive craniectomy for malignant brain swelling due to closed traumatic brain injury (TBI). During a 48-month period (March 2000-March 2004), 50 of 967 consecutive patients with closed TBI experienced diffuse brain swelling and underwent decompressive craniectomy, without removal of clots or contusion, to control intracranial pressure (ICP) or to reverse dangerous brain shifts. Diffuse injury was demonstrated in 44 patients, an evacuated mass lesion in four in whom decompressive craniectomy had been performed as a separate procedure, and a nonevacuated mass lesion in two. Decompressive craniectomy was performed urgently in 10 patients before ICP monitoring; in 40 patients the procedure was performed after ICP had become unresponsive to conventional medical management as outlined in the American Association of Neurological Surgeons guidelines. Survivors were followed up for at least 3 months posttreatment to determine their Glasgow Outcome Scale (GOS) score. Decompressive craniectomy lowered ICP to less than 20 mm Hg in 85% of patients. In the 40 patients who had undergone ICP monitoring before decompression, ICP decreased from a mean of 23.9 to 14.4 mm Hg (p < 0.001). Fourteen of 50 patients died, and 16 either remained in a vegetative state (seven patients) or were severely disabled (nine patients). Twenty patients had a good outcome (GOS Score 4-5). Among 30-day survivors, good outcome occurred in 17, 67, and 67% of patients with postresuscitation Glasgow Coma Scale scores of 3 to 5, 6 to 8, and 9 to 15, respectively (p < 0.05). Outcome was unaffected by abnormal pupillary response to light, timing of decompressive craniectomy, brain shift as demonstrated on computerized tomography scanning, and patient age, possibly because of the small number of patients in each of the subsets. Complications included hydrocephalus (five patients), hemorrhagic swelling ipsilateral to the craniectomy site (eight patients), and subdural hygroma (25 patients). Decompressive craniectomy was associated with a better-than-expected functional outcome in patients with medically uncontrollable ICP and/or brain herniation, compared with outcomes in other control cohorts reported on in the literature.

Richard Polin,  N Tisdale,  M Shaffrey … (1997)
The management of malignant posttraumatic cerebral edema remains a frustrating endeavor for the neurosurgeon and the intensivist. Mortality and morbidity rates remain high despite refinements in medical and pharmacological means of controlling elevated intracranial pressure; therefore, a comparison of medical management versus decompressive craniectomy in the management of malignant posttraumatic cerebral edema was undertaken. At the University of Virginia Health Sciences Center, 35 bifrontal decompressive craniectomies were performed on patients suffering from malignant posttraumatic cerebral edema. A control population was formed of patients whose data was accrued in the Traumatic Coma Data Bank. Patients who had undergone surgery were matched with one to four control patients based on sex, age, preoperative Glasgow Coma Scale scores, and maximum preoperative intracranial pressure (ICP). The overall rate of good recovery and moderate disability for the patients who underwent craniectomies was 37% (13 of 35 patients), whereas the mortality rate was 23% (8 of 35 patients). Pediatric patients had a higher rate of favorable outcome (44%, 8 of 18 patients) than did adult patients. Postoperative ICP was lower than preoperative ICP in patients who underwent decompression (P = 0.0003). Postoperative ICP was lower in patients who underwent surgery than late measurements of ICP in the matched control population. A statistically significant increased rate of favorable outcomes was seen in the patients who underwent surgery compared to the matched control patients (15.4%) (P = 0.014). All patients who exhibited sustained ICP values above 40 torr and those who underwent surgery more than 48 hours after the time of injury did poorly. Evaluation of the 20 patients who did not fit into either of those categories revealed a 60% rate of favorable outcome and a statistical advantage over control patients (P = 0.0001). Decompressive bifrontal craniectomy provides a statistical advantage over medical treatment of intractable posttraumatic cerebral hypertension and should be considered in the management of malignant posttraumatic cerebral swelling. If the operation can be accomplished before the ICP value exceeds 40 torr for a sustained period and within 48 hours of the time of injury, the potential to influence outcome is greatest.