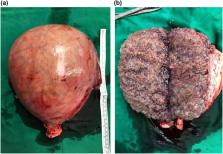 Gestational trophoblastic disease (GTD) commonly occurs in reproductive females, but is extremely rare in perimenopausal females. In this study, we reported a case of hydatidiform mole in a 48-year-old perimenopausal female admitted due to a giant uterine mass of 28 weeks’ gestational size. The serum human chorionic gonadotropin (HCG) level ranged from 944 to 1,286 mIU/mL before treatments. The signs of preeclampsia and hyperthyroidism were relatively prominent. Hysterectomy was performed and chemotherapy was scheduled when the serum HCG level remained at a plateau, about 528 mIU/mL. The symptoms of preeclampsia and hyperthyroidism were relieved after treatment. Accordingly, we concluded that GTD could occur in perimenopausal woman and hysterectomy usually is the optimal treatment.

Diagnosis and management of hypertension in pregnancy: summary of updated NICE guidance

Qiuyi Wang,  Jing Fu (corresponding) ,  Lina Hu … (2017)
This is an update of the original Cochrane Review published in Cochrane Library, Issue 10, 2012.Hydatidiform mole (HM), also called a molar pregnancy, is characterised by an overgrowth of foetal chorionic tissue within the uterus. HMs may be partial (PM) or complete (CM) depending on their gross appearance, histopathology and karyotype. PMs usually have a triploid karyotype, derived from maternal and paternal origins, whereas CMs are diploid and have paternal origins only. Most women with HM can be cured by evacuation of retained products of conception (ERPC) and their fertility preserved. However, in some women the growth persists and develops into gestational trophoblastic neoplasia (GTN), a malignant form of the disease that requires treatment with chemotherapy. CMs have a higher rate of malignant transformation than PMs. It may be possible to reduce the risk of GTN in women with HM by administering prophylactic chemotherapy (P-Chem). However, P-Chem given before or after evacuation of HM to prevent malignant sequelae remains controversial, as the risks and benefits of this practice are unclear.

Invasive mole in a postmenopausal woman.

This work is licensed under the Creative Commons Attribution 4.0 International License.