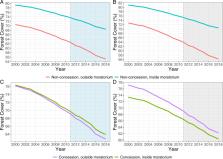 More than a decade after the global adoption of REDD+ as a climate change mitigation strategy, countries have started accessing results-based payments. However, the extent to which payments are actually based on results is unknown, necessitating program evaluations to establish the contribution of REDD+ to the Paris NDCs. We undertake a microeconometric evaluation of one of the most globally significant REDD+ initiatives, Indonesia’s moratorium on forest concessions, in which a payment has been awarded. At the agreed US$5/tCO 2-eq, the value of our estimated cumulative carbon emissions far exceeds the proposed payment from the donor, Norway. Although cost-effective, the emissions reductions only contribute 3 to 4% of Indonesia’s NDC. This contribution could be increased in new initiatives with better-designed incentives and institutional arrangements.

International initiatives for reducing carbon emissions from deforestation and forest degradation (REDD+) could make critical, cost-effective contributions to tropical countries’ nationally determined contributions (NDCs). Norway, a key donor of such initiatives, had a REDD+ partnership with Indonesia, offering results-based payments in exchange for emissions reductions calculated against a historical baseline. Central to this partnership was an area-based moratorium on new oil palm, timber, and logging concessions in primary and peatland forests. We evaluate the effectiveness of the moratorium between 2011 and 2018 by applying a matched triple difference strategy to a unique panel dataset. Treated dryland forest inside moratorium areas retained, at most, an average of 0.65% higher forest cover compared to untreated dryland forest outside the moratorium. By contrast, carbon-rich peatland forest was unaffected by the moratorium. Cumulative avoided dryland deforestation from 2011 until 2018 translates into 67.8 million to 86.9 million tons of emissions reductions, implying an effective carbon price below Norway’s US$5 per ton price. Based on Norway’s price, our estimated cumulative emissions reductions are equivalent to a payment of US$339 million to US$434.5 million. Annually, our estimates suggest a 3 to 4% contribution to Indonesia’s NDC commitment of a 29% emissions reduction by 2030. Despite the Indonesia–Norway partnership ending in 2021, reducing emissions from deforestation remains critical for meeting this commitment. Future area-based REDD+ initiatives could build on the moratorium’s outcomes by reforming its incentives and institutional arrangements, particularly in peatland forest areas.

M. Hansen, P. Potapov, R. Moore … (2013)
Quantification of global forest change has been lacking despite the recognized importance of forest ecosystem services. In this study, Earth observation satellite data were used to map global forest loss (2.3 million square kilometers) and gain (0.8 million square kilometers) from 2000 to 2012 at a spatial resolution of 30 meters. The tropics were the only climate domain to exhibit a trend, with forest loss increasing by 2101 square kilometers per year. Brazil's well-documented reduction in deforestation was offset by increasing forest loss in Indonesia, Malaysia, Paraguay, Bolivia, Zambia, Angola, and elsewhere. Intensive forestry practiced within subtropical forests resulted in the highest rates of forest change globally. Boreal forest loss due largely to fire and forestry was second to that in the tropics in absolute and proportional terms. These results depict a globally consistent and locally relevant record of forest change.

This open access article is distributed under Creative Commons Attribution License 4.0 (CC BY).