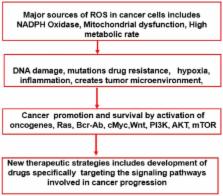 This review focuses the role of ROS in cancer survival pathways and importance of targeting the ROS signal involved in cancer development, which is a new strategy in cancer treatment.

M. Toledano,  B. D’Autreaux (2007)
Reactive oxygen species (ROS) have been shown to be toxic but also function as signalling molecules. This biological paradox underlies mechanisms that are important for the integrity and fitness of living organisms and their ageing. The pathways that regulate ROS homeostasis are crucial for mitigating the toxicity of ROS and provide strong evidence about specificity in ROS signalling. By taking advantage of the chemistry of ROS, highly specific mechanisms have evolved that form the basis of oxidant scavenging and ROS signalling systems.

Specific aquaporins facilitate the diffusion of hydrogen peroxide across membranes.

Alexander Schulz,  Anders L B Møller,  P Jahn … (2007)
The metabolism of aerobic organisms continuously produces reactive oxygen species. Although potentially toxic, these compounds also function in signaling. One important feature of signaling compounds is their ability to move between different compartments, e.g. to cross membranes. Here we present evidence that aquaporins can channel hydrogen peroxide (H2O2). Twenty-four aquaporins from plants and mammals were screened in five yeast strains differing in sensitivity toward oxidative stress. Expression of human AQP8 and plant Arabidopsis TIP1;1 and TIP1;2 in yeast decreased growth and survival in the presence of H2O2. Further evidence for aquaporin-mediated H2O2 diffusion was obtained by a fluorescence assay with intact yeast cells using an intracellular reactive oxygen species-sensitive fluorescent dye. Application of silver ions (Ag+), which block aquaporin-mediated water diffusion in a fast kinetics swelling assay, also reversed both the aquaporin-dependent growth repression and the H2O2-induced fluorescence. Our results present the first molecular genetic evidence for the diffusion of H2O2 through specific members of the aquaporin family.

James Klaunig,  Lisa Kamendulis,  Barbara Hocevar (2009)
Carcinogenesis is a multistep process involving mutation and the subsequent selective clonal expansion of the mutated cell. Chemical and physical agents including those that induce reative oxygen species can induce and/or modulate this multistep process. Several modes of action by which carcinogens induce cancer have been identified, including through production of reactive oxygen species (ROS). Oxidative damage to cellular macromolecules can arise through overproduction of ROS and faulty antioxidant and/or DNA repair mechanisms. In addition, ROS can stimulate signal transduction pathways and lead to activation of key transcription factors such as Nrf2 and NF-kappaB. The resultant altered gene expression patterns evoked by ROS contribute to the carcinogenesis process. Recent evidence demonstrates an association between a number of single nucleotide polymorphisms (SNPs) in oxidative DNA repair genes and antioxidant genes with human cancer susceptibility. These aspects of ROS biology will be discussed in the context of their relationship to carcinogenesis.

This article is distributed under the terms of the Creative Commons Attribution-NonCommercial 4.0 License ( http://www.creativecommons.org/licenses/by-nc/4.0/) which permits non-commercial use, reproduction and distribution of the work without further permission provided the original work is attributed as specified on the SAGE and Open Access pages( https://us.sagepub.com/en-us/nam/open-access-at-sage).