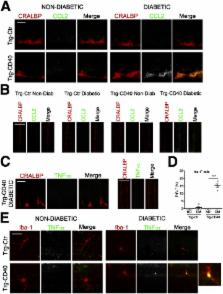 E Stam,  N Petrushova,  Lyn R Griffiths … (2001)
The P2X(7) receptor (P2X(7)R) is an ATP-gated ion channel expressed by monocytes and macrophages. To directly address the role of this receptor in interleukin (IL)-1 beta post-translational processing, we have generated a P2X(7)R-deficient mouse line. P2X(7)R(-/-) macrophages respond to lipopolysaccharide and produce levels of cyclooxygenase-2 and pro-IL-1 beta comparable with those generated by wild-type cells. In response to ATP, however, pro-IL-1 beta produced by the P2X(7)R(-/-) cells is not externalized or activated by caspase-1. Nigericin, an alternate secretion stimulus, promotes release of 17-kDa IL-1 beta from P2X(7)R(-/-) macrophages. In response to in vivo lipopolysaccharide injection, both wild-type and P2X(7)R(-/-) animals display increases in peritoneal lavage IL-6 levels but no detectable IL-1. Subsequent ATP injection to wild-type animals promotes an increase in IL-1, which in turn leads to additional IL-6 production; similar increases did not occur in ATP-treated, LPS-primed P2X(7)R(-/-) animals. Absence of the P2X(7)R thus leads to an inability of peritoneal macrophages to release IL-1 in response to ATP. As a result of the IL-1 deficiency, in vivo cytokine signaling cascades are impaired in P2X(7)R-deficient animals. Together these results demonstrate that P2X(7)R activation can provide a signal that leads to maturation and release of IL-1 beta and initiation of a cytokine cascade.

Steven Levison,  Kathryn LaNoue,  R. Gardner … (2005)
Diabetes leads to vascular leakage, glial dysfunction, and neuronal apoptosis within the retina. The goal of the studies reported here was to determine the role that retinal microglial cells play in diabetic retinopathy and assess whether minocycline can decrease microglial activation and alleviate retinal complications. Immunohistochemical analyses showed that retinal microglia are activated early in diabetes. Furthermore, mRNAs for interleukin-1beta and tumor necrosis factor-alpha, proinflammatory mediators known to be released from microglia, are also increased in the retina early in the course of diabetes. Using an in vitro bioassay, we demonstrated that cytokine-activated microglia release cytotoxins that kill retinal neurons. Furthermore, we showed that neuronal apoptosis is increased in the diabetic retina, as measured by caspase-3 activity. Minocycline represses diabetes-induced inflammatory cytokine production, reduces the release of cytotoxins from activated microglia, and significantly reduces measurable caspase-3 activity within the retina. These results indicate that inhibiting microglial activity may be an important strategy in the treatment of diabetic retinopathy and that drugs such as minocycline hold promise in delaying or preventing the loss of vision associated with this disease.