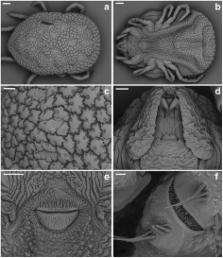 The rock cavy Kerodon rupestris (Wied-Neuwied, 1820) is a rodent species endemic to northeastern Brazil. Earlier studies have associated the argasid tick Ornithodoros talaje (Guérin-Méneville, 1849) with rocky cavy; however, a recent study proposed that O. talaje is not established in Brazil, where previous reports of this species were possibly misidentifications of closely related species, yet to be properly determined. Here, we describe a new species of Ornithodoros Koch, 1844 associated with rock cavies in northeastern Brazil .

During 2012–2013, Ornithodoros ticks were collected from K. rupestris resting places in Paraíba State (PB) and Piauí State (PI), northeastern Brazil. These ticks were brought alive to the laboratory, and used to form two laboratory colonies (PB and PI ticks). Field-collected adults and laboratory-reared larvae were used for morphological description through light and scanning electron microscopy. DNA sequences of the mitochondrial 16S rRNA gene were generated from nymphal ticks and used to conduct phylogenetic analyses along with other Ornithodoros spp. sequences from GenBank. Reproductive compatibility of crosses between PB and PI adult ticks was evaluated, as well as analyses of hybrid ticks through larval morphology by a principal components analysis (PCA) and DNA sequences of the second internal transcribed spacer (ITS2) region from adult ticks.

Morphological analysis allowed recognizing these ticks as a new species, Ornithodoros rietcorreai n. sp. The larva of O. rietcorreai is distinct from those of other Ornithodoros spp. by the combination of the following character states: 14 pairs of dorsal setae, dorsal plate pyriform, hypostome with pointed apex and dental formula 3/3 anteriorly, 2/2 posteriorly, and anal valves with long and pointed leaf-shaped ends. There were a few larval morphological differences between PB and PI ticks , and their mitochondrial 16S rDNA sequences diverged by 3.3 %. On the other hand, cross-mating experiments showed that PB and PI ticks were reproductive compatible, indicating that they represent a single species. Analyses of ITS2 sequences and PCA corroborated this assumption.

Ornithodoros rietcorreai is described as a new species associated with K. rupestris in Brazil, increasing the Brazilian tick fauna to 70 species.

Mitochondrial 16S rDNA sequences and phylogenetic relationships of species of Rhipicephalus and other tick genera among Metastriata (Acari: Ixodidae).

A Mangold,  M D Bargues,  S Mas-Coma (1998)
The mitochondrial 16S rRNA gene sequences of the following eight European Metastriata tick species were obtained by direct polymerase-chain-reaction cycle sequencing and silver-staining methods: Rhipicephalus bursa, R. pusillus, R. sanguineus, R. turanicus, Boophilus annulatus, Dermacentor marginatus, Haemaphysalis punctata, and Hyalomma lusitanicum. This mitochondrial gene seems to be a good marker for the establishment of genetic relationships among closely related tick species, but it does not seem to be useful for comparisons of distantly related taxa. The molecular data provide very strong support for the monophyly of the Rhipicephalinae, including Hyalomma spp. However, the genus Rhipicephalus may not be considered a monophyletic group; in all analyses carried out in this study, R. bursa clustered with Boophilus spp. The high percentage of similarity (98.7%) observed between R. sanguineus and R. turanicus sequences would suggest that these species recently diverged within the Rhipicephalus genus. Phylogenetic analyses showed a monophyletic relationship among Amblyomminae taxa. The relationships between Haemaphysalis species and the true placement of this genus within Metastriata could not be resolved.

Lorenza Beati,  Santiago Nava,  Erica J Burkman … (2013)
Background Amblyomma cajennense F. is one of the best known and studied ticks in the New World because of its very wide distribution, its economical importance as pest of domestic ungulates, and its association with a variety of animal and human pathogens. Recent observations, however, have challenged the taxonomic status of this tick and indicated that intraspecific cryptic speciation might be occurring. In the present study, we investigate the evolutionary and demographic history of this tick and examine its genetic structure based on the analyses of three mitochondrial (12SrDNA, d-loop, and COII) and one nuclear (ITS2) genes. Because A. cajennense is characterized by a typical trans-Amazonian distribution, lineage divergence dating is also performed to establish whether genetic diversity can be linked to dated vicariant events which shaped the topology of the Neotropics. Results Total evidence analyses of the concatenated mtDNA and nuclear + mtDNA datasets resulted in well-resolved and fully congruent reconstructions of the relationships within A. cajennense. The phylogenetic analyses consistently found A. cajennense to be monophyletic and to be separated into six genetic units defined by mutually exclusive haplotype compositions and habitat associations. Also, genetic divergence values showed that these lineages are as distinct from each other as recognized separate species of the same genus. The six clades are deeply split and node dating indicates that they started diverging in the middle-late Miocene. Conclusions Behavioral differences and the results of laboratory cross-breeding experiments had already indicated that A. cajennense might be a complex of distinct taxonomic units. The combined and congruent mitochondrial and nuclear genetic evidence from this study reveals that A. cajennense is an assembly of six distinct species which have evolved separately from each other since at least 13.2 million years ago (Mya) in the earliest and 3.3 Mya in the latest lineages. The temporal and spatial diversification modes of the six lineages overlap the phylogeographical history of other organisms with similar extant trans-Amazonian distributions and are consistent with the present prevailing hypothesis that Neotropical diversity often finds its origins in the Miocene, after the Andean uplift changed the topology and consequently the climate and ecology of the Neotropics.